Posted on October 15, 2019 by mikethemadbiologist

Because they turn conservative and moderate Democrats into left-ish convention delegates. According to morningconsult.com, here is how the race looks among Democratic voters: 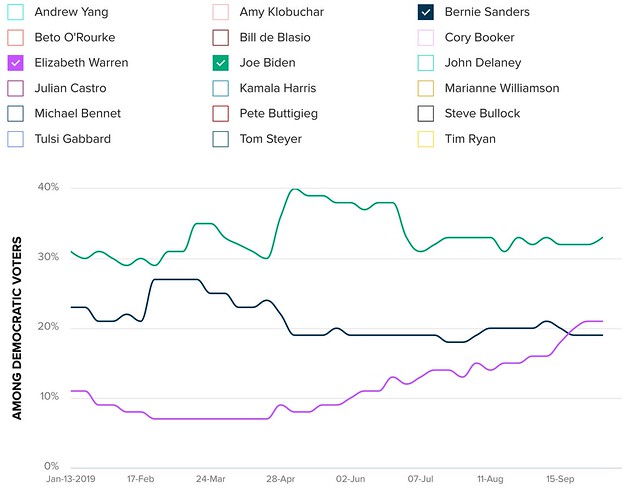 The reason I’m using Morning Consult is because they also ask supporters who their second choice would be (yes, there is one poll from a different outfit showing Warren and Biden neck-and-neck. While that’s encouraging, it’s one poll). Among Sanders supporters, there’s a very slight edge for Warren as second over Biden, while the converse is true for Sanders. Despite what the internecine snipers on the leftward side of the party would have you believe, Sanders and Warren are each pulling away significant votes from Biden. If one of them drops, Biden moves up in absolute terms, and this race suddenly becomes the centrist versus the leftist, with Biden the centrist having the advantage. That won’t play out well, as the political press corps will begin to marginalize the left-ish candidate, and Biden could pull away.

Likewise, if there isn’t a clear winner by the time the convention rolls around, both Sanders and Warren will have turned a significant portion of willing Biden supporters into lefty delegates–which is a good thing. Because the leftward side of things needs to remember that Biden isn’t a good candidate, and he likely would be a mediocre president, setting up someone like Tom Cotton for 2024.

We need both of them in the race right now, unless you want a Biden candidacy.