Posted on February 4, 2020 by mikethemadbiologist

It’s utterly mind boggling. Recently, parts of Democratic Twitter were convulsed by comedian and podcaster Joe Rogan’s endorsement of Democratic presidential hopeful Sen. Bernie Sanders–and the poor decision by the Sanders campaign to retweet Rogan’s endorsement, as Joe Rogan and many of his listeners are decidedly…not woke. There was a fair amount of commentary along the lines of ‘we don’t want racists in the Democratic Party.’ (then Matthew Yglesias started the convulsions again).

It’s belied by the argument for Joe Biden’s candidacy, which, in part, relies on the need to appeal to voters who want Obama-style cooperation, but without… Obama–and I don’t think the difference between the two is Obama’s decision to have worn a beige suit. But among the more woke denizens of Democratic Twitter (though pseudo-woke is more apt, as there appears to be a lot of situational wokeness), there is a disturbing failure to recognize exactly who votes Democratic.

Put simply, about twenty percent (probably a bit higher) of the entire Democratic vote is pretty racist–and the denominator of that percentage includes black people. Here’s a poll from 2016, broken down by primary favorite–ignore Trump, and focus on the Clinton and Sanders percentages: 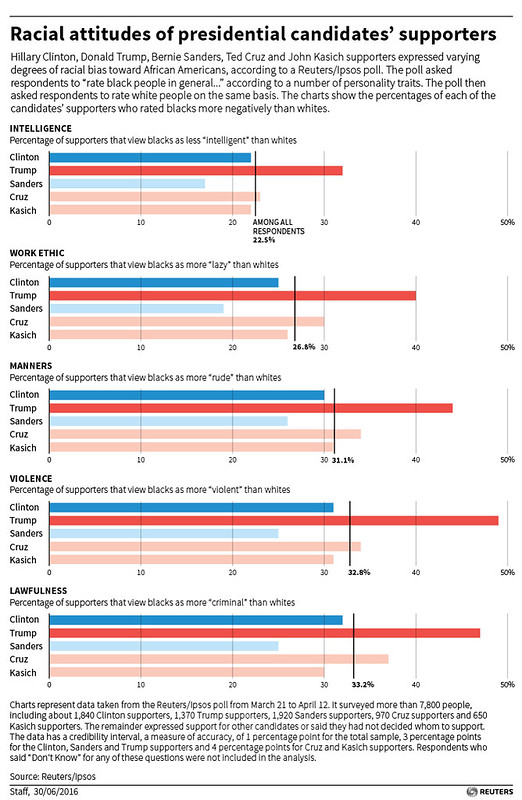 Turns out new data support this finding (boldface mine):

The biggest yawning gap between Democrats and Republicans is on the issue of motivation and will power. The GSS asks whether African Americans are worse off economically “because most just don’t have the motivation or will power to pull themselves up out of poverty?”

A majority — 55 percent — of white Republicans agreed with this statement, compared to 26 percent of white Democrats. That’s the biggest gap since the question was first asked in 1977 — though the gap was similar (60-32) in 2010.

This isn’t some sort of hidden bias, it’s just pretty fucking racist. And then:

The survey also asks people to rate the races on how hard-working or lazy they are, which allows us to compare whether people rate some higher than others.

Again, the point is not to defend Joe Rogan, or the Sanders’ retweet, or the pro-Sanders tankies’ defense of said tweet. Anyone who has done canvassing in the old days, when canvass lists were far less targeted, or who has attended a Democratic ward meeting, is absolutely aware of how awful some Democratic voters can be. But without their votes, we lose. BIGLY:

While much of the discussion often revolves around presidential dynamics (I’m guilty of this too), it’s the states where often the most retrograde policies are enacted. To win back states and thereby help Democratic strongholds, Democrats have no choice but to convince these voters to show up (or at least not vote Republican).

As Ezekiel Kweku put it about well-known class warfare advocate Barack Obama (we make the funny; boldface mine):

Some of them, in fact, see maintaining white domination of the political, cultural, and economic spheres as being very much in their self-interest. Donald Trump won the election by playing on this fact; Obama was able to win two elections in spite of it. Crucially, Obama didn’t pull this off by convincing white people not to be racist, he did it by convincing them to vote for him anyway, by crafting a message that appealed to their self-interest…

In the aftermath of the election, we seem to have been drawn into an argument about whether people who voted for Donald Trump “are racists,” and whether Democrats should reach out to racists or cut them off. I find this argument mystifying because it has no real political application.

Donald Trump won the election, and if the Democrats don’t want him to win the next one, they must either convince some of the people who voted for him not to do so again, or convince some of the people who didn’t vote at all to vote for the Democratic candidate. The question of whether people in either group are racist seems to me to be irrelevant to both of these tasks. The practice of pigeonholing voters into the categories of “racist” and “not racist” is counterproductive. A more useful frame is to decide which voters can be persuaded to vote for Democratic candidates and which can’t. Certainly there’s a swath of people so wedded to white supremacy that they will not vote for a party committed to racial justice no matter what, but Democrats do not need to win those voters to win a presidential election. As Obama’s election demonstrates, some of the voters who land in the “persuadable” category will hold racist views. This time around, there were also black people who chose to stay at home, and Latinos who aren’t engaged in national politics, and white women who carried a grudge against Hillary Clinton for whatever reason (and there’s plenty more to be said about the role misogyny played in this election, too). The Democrats are going to have to reach some of these people in order to win the next election.

This is not to say, as some on both the left and the right have argued, that the Democrats must compromise or sideline their substantive (or even rhetorical) commitment to justice for marginalized people, or stop doing “identity politics.” The Democrats should not, for instance, disavow Black Lives Matter or abandon criminal justice reform. Instead, as Obama did, they must appeal to their traditional base in the working and middle class (not just the white working class) in a way that addresses the self-interest of these groups.

Was the Sanders campaign’s decision stupid? Yes, though it shouldn’t override Sanders’ actual record. And, yes, tankies are assholes–and so is Joe Rogan. But assholes vote–and enough of them vote for the Democratic Party.

In other words, the bigoted asshole vote is a critical part of the Democratic coalition. Doing what Bertolt Brecht sarcastically suggested–”Dissolve the people and elect another?” isn’t an option.

But a message that appeals to some racists who are willing to vote based on something other than the ideology of racism–and I think Warren and Sanders both have one–also can appeal to many marginal voters, including “black people who chose to stay at home, and Latinos who aren’t engaged in national politics, and white women who carried a grudge against Hillary Clinton for whatever reason.”

We need to understand our voters, including the deplorable ones. If we don’t, we will lose.

Related: After writing this, I came across this post by Ed Burmilla who links to my older work and has an excellent discussion.