U.S. Mass Transit Needs To Stop Focusing Only On Commuting

Posted on September 7, 2018 by mikethemadbiologist

Obviously, a fair amount of traveling in the U.S. involves the daily work commute. But U.S. mass transit, in city after city, focuses too much on commuting. This is the end result (boldface mine):

One hundred years ago, the United States had a public transportation system that was the envy of the world. Today, outside a few major urban centers, it is barely on life support. Even in New York City, subway ridership is well below its 1946 peak. Annual per capita transit trips in the U.S. plummeted from 115.8 in 1950 to 36.1 in 1970, where they have roughly remained since, even as population has grown…

While a decline in transit use in the face of fierce competition from the private automobile throughout the 20th century was inevitable, near-total collapse was not… Once cars arrived, nearly every U.S. transit agency slashed service to cut costs, instead of improving service to stay competitive. This drove even more riders away, producing a vicious cycle that led to the point where today, few Americans with a viable alternative ride buses or trains…

Operations—the actual running of buses and trains frequently enough to appeal to people with an alternative—are perpetually starved for cash. Even transit advocates have internalized the idea that transit cannot be successful outside the highest-density urban centers.

And it very rarely is. Below is a set of maps that show the present-day network rail and bus lines operating at least every 30 minutes, all day to midnight, seven days a week, for five urban areas in the U.S. and one in Canada for comparison. That could be considered the bare-minimum service level required for people to be able to live adequately car free. In fact, research says that frequencies of 15 minutes or better—good enough for people to turn up and go without consulting a schedule—are where the biggest jumps in ridership happen. But that is so far off from service levels in most American cities that a 30-minute standard is more appropriate…

For those who do live near one, it’s quite likely that the bus wouldn’t get them where they need to go, unless their destination is downtown. A bus that comes once and hour, stops at 7 pm, and doesn’t run on Sundays—a typical service level in many American cities—restricts people’s lives so much that anyone who can drive, will drive. That keeps ridership per capita low.

What happened? Over the past hundred years the clearest cause is this: Transit providers in the U.S. have continually cut basic local service in a vain effort to improve their finances. But they only succeeded in driving riders and revenue away. When the transit service that cities provide is not attractive, the demand from passengers that might “justify” its improvement will never materialize.

Here’s what a city, Toronto, with good mass transit looks like: 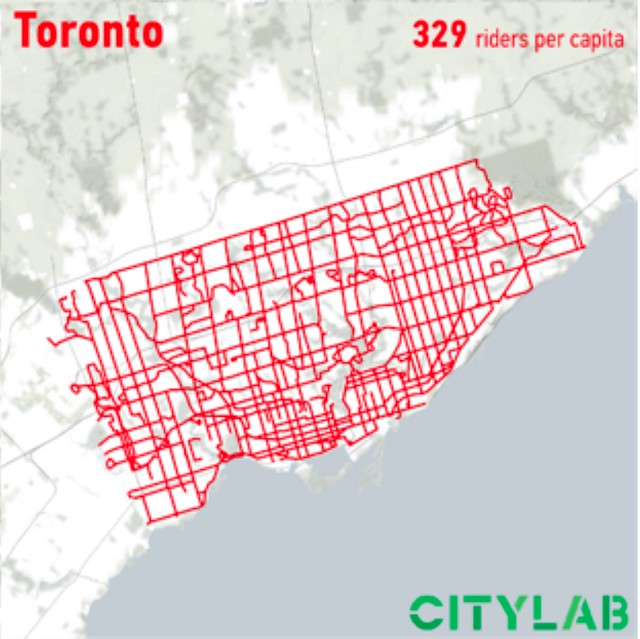 You can get most everywhere.

Here’s D.C., which compared to many U.S. cities, is actually pretty good: 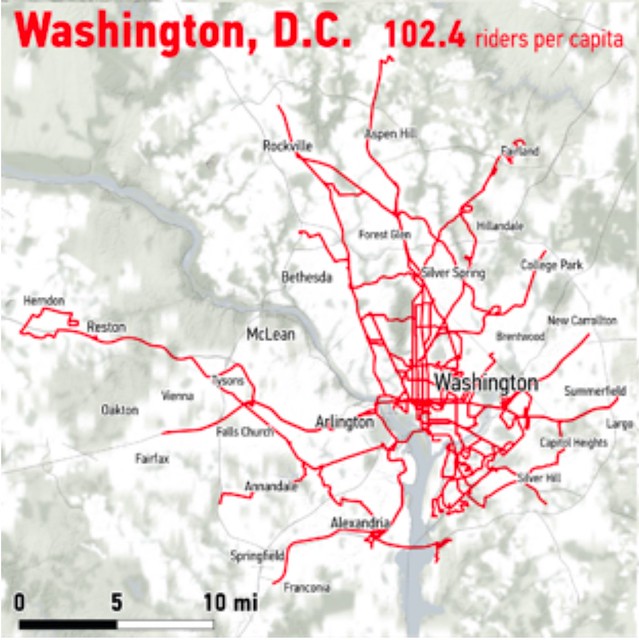 If you look at the District of Columbia itself (a diamond, with the top point near the “V” below Silver Spring, the right point near Capitol Heights, and the bottom point due east of Alexandria), two things stick out. First, the ‘suburban’ parts of D.C., such as Upper Northwest and much of Northeast have little good mass transit. Second, north of P Street (which runs through Dupont Circle), there is very little mass transit that efficiently moves people east to west (and vice versa).

The ‘reliable’ lines in D.C., many of which are train, serve commuter routes. They run into the city center and back out–and that is how the system was designed. On top of that, the bus routes are designed to feed into the subway system, reinforcing this pattern. While this is useful for getting to work (for some), it’s not as useful for getting around after hours and on the weekends. So the Metro system (including the bus) becomes simply another means of commuting, one that can easily be discarded.

The first thing WMATA/Metro needs to do is finish fixing all the things. But after that, it really needs to reinvent its bus routes, so they work for more people.t