Posted on February 18, 2020 by mikethemadbiologist

And that’s not a good thing (for him, anyway). Yesterday, for reasons largely unclear*, the Bloomberg campaign attacked several Sanders staffers. I’ll be the first to admit that Gray, Sirota, and Turner occasionally act like idiots online**, but, still, it’s hard for me to see what the broadside did, other than draw attention to Bloomberg’s deficiencies (hence the reference to the Streisand Effect). Leaving aside some prattling about unity (from the campaign of a man who has supported Republicans in the recent past), here’s the bill of particulars–sadly, I’m not on the Bloomberg campaign email list (not sad at all akshually), so it’s a screenshot: 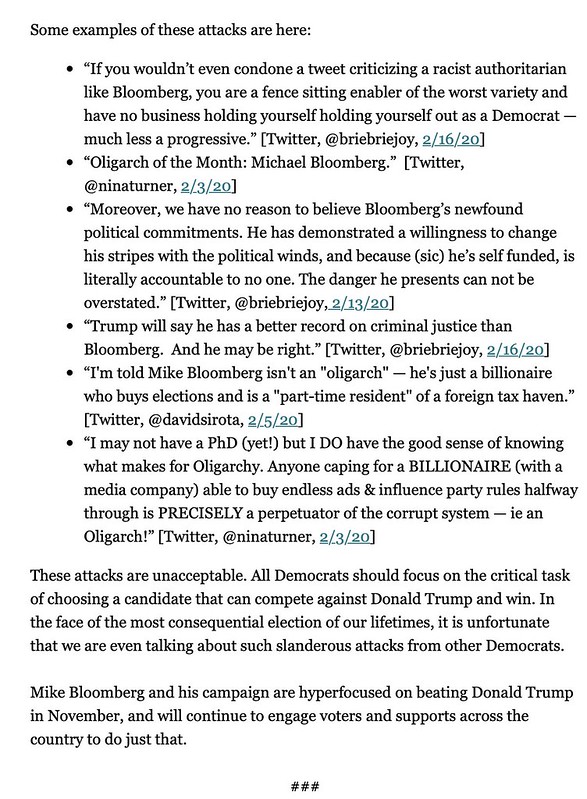 The first tweet is stupid, I grant you that. There are lots of reasons why someone might not condone a tweet–and it’s a fucking tweet, so who gives a crap, anyway?–but that doesn’t mean said someone is a “fence sitting enabler.” A press secretary/outreach person should be smarter than that (then again, that sort of belligerence is par for the course for Republican press secretaries). But the other tweets are… fine.

The second, fifth, and sixth tweets accuse Bloomberg of being an oligarch. Problem is, he is an oligarch. He is one of the wealthiest people in the world, and has used that wealth to further his own political career and political causes. He gave money to New York City charities to build up political goodwill, and then, in return, got their support to provide him and him alone an exemption to the limit of two terms as mayor. That’s exactly what an oligarch would do. Why on earth would Bloomberg want to draw attention to this?

The third tweet also is fair: Bloomberg appears to have radically changed his opinion on some key economic issues like the minimum wage from those he held at the tender age of…seventy. Maybe you disagree with the distrust, but it certainly seems fair to me, and, again, why does Bloomberg want to draw attention to this?

The fourth tweet is also a nothingburger. Arguing if Mayor Stop-and-Frisk is more or less racist than President Build-the-Wall is like asking if an animal torturer is better or worse than someone who exposes himself to children: there are no good sides here, and both are awful in their own way.

I realize Bloomberg’s play probably isn’t to win as much as it is to drag Sanders down–and Warren supporters, don’t think for a moment that, if he succeeds, he won’t attack Warren; he will attack Warren if she appears to pose a threat because hates them equally. That said, I’m not even sure this helps tear down Sanders. Most people aren’t on Twitter, and even those who are, have little or no experience with TEH BERNIE BROS! or Chapo Outhouse (not a fan myself), but the proffered list of perfidy is very mild. This might undercut the BERNIE BROS! narrative as much as it strengthens it.

*Some have suggested that, since Bloomberg hasn’t been in a primary or in a debate, this is a way to garner attention. Dunno.

**My co-religionists are being murdered in synagogues. The drama among the left-ish podcast and Twitter fame sets with long-term grudges towards each other holds very little meaning to me.