Healthcare Is Still Too Damn Expensive

Posted on August 8, 2019 by mikethemadbiologist

And what that means for wages. By way of Axios, we come across this figure: 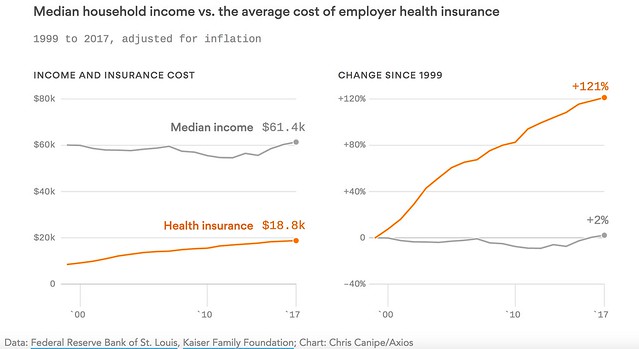 Employers consider a block of compensation for every employee. Health insurance, which is exempt from taxes, has eaten up a lot more of that block over time.

Keep in mind that deductibles and co-payments also are increasing. To put this in concrete terms, if your employer picks up part of your healthcare insurance costs, a family’s average insurance payment (again, not any additional costs) has risen, in real 2017 dollars, from $1543 in 1999 to $5714 in 2018. And insurance doesn’t cover what it used to, so, unless you’re really lucky, add at least $1,000 to that for deductibles, medicines, and so on. That’s a significant chunk of income–of course, it’s even worse if you’re paying the full amount (e.g., self-employed). Even knocking off fifteen percent wouldn’t be trivial, especially if you’re earning below the median income; at the same time, your employer also would save a similar amount.

Best system in the world…

This entry was posted in Healthcare. Bookmark the permalink.

2 Responses to Healthcare Is Still Too Damn Expensive