The Accidental Genius of School Lotteries: The D.C. Edition

Posted on July 24, 2015 by mikethemadbiologist

By way of Greater Greater Washington, we come across this figure, showing a very tight relationship between housing values and reading proficiency: 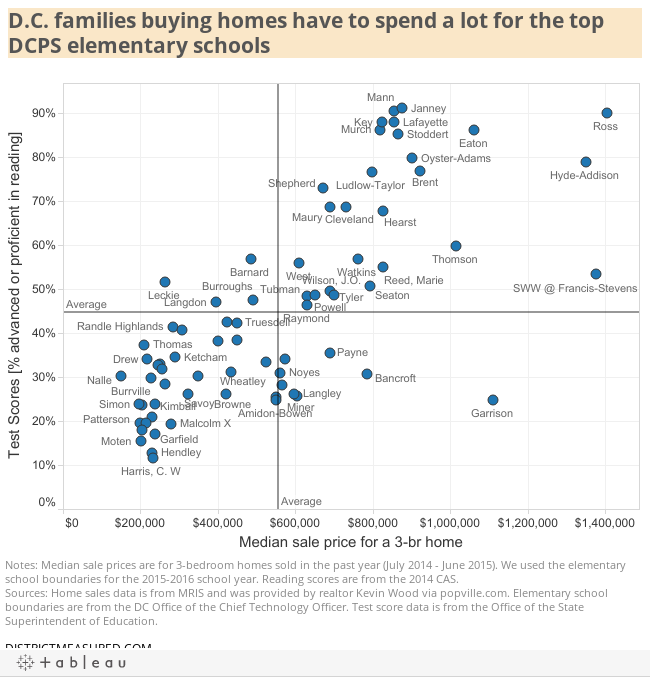 The one real outlier, Garrison Elementary is in a rapidly gentrifying neighborhood (in real dollar values, housing prices have increased 7 – 10 fold over the last twenty years). This is the best argument for a Boston-like lottery system (and that system still preserves the ability to go to a local school). As I noted many years ago, parents are fleeing ‘undesirable’ (that is, poor) student bodies and choosing wealthy ones. It’s not that lotteries will make D.C.’s test scores better, but they will break up the linkage between housing values and student performance, stabilizing middle-class and even upper-middle class neighborhoods (keep in mind, that to reliably break the 50% proficiency mark, a neighboorhood has to have an average property value greater than $600,000).

The other thing to note is that this relationship probably isn’t due to teacher quality. Maybe teacher quality just happens to mimic housing values–we can’t rule that out. And maybe, as wealth increases, parents are increasingly able to alter teacher composition in a consistent fashion. But these differences in performance perhaps might be largely affected by something else. Not sure what that could be….

And, as always, I blame the teachers unions. Or something.

2 Responses to The Accidental Genius of School Lotteries: The D.C. Edition