Why I’m Nervous about the 2020 Presidential Election: It’s the Map, Stupid

Posted on August 11, 2020 by mikethemadbiologist

And if Oliver Willis stumbles across this, he might yell at me for being pessimistic. Onward comrades…

Leaving aside Biden’s flaws–and he still has them, but that’s preferable to a mass murderer–what worries me is the Electoral College. Consider this map, which seems a pretty reasonable estimate of where things currently stand: 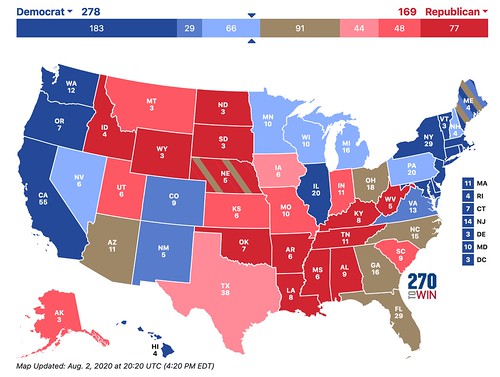 This map does not feel me with optimism. Other than Arizona, I find it hard to believe that Biden can win any of these states or the swing votes in Maine and Nebraska. And between mail-in voting, a lack of appeal to young voters, and Republican chicanery, Wisconsin seems optimistic. Losing all the ‘brown’ regions and Wisconsin yields a two vote Electoral College victory for Trump.

Yes, the polling suggests a Biden victory, but it also suggests a ten point win, and I don’t think that will hold (already, the political press corps is emphasizing Biden’s idiot eruptions–and we told you this would happen). Given the map, it’s very possible that Trump wins the electoral college, even as Biden gains an actual majority–not a plurality like Clinton, but a majority.

I’m willing to admit I’m completely reading the moment wrong, and that Biden can hold Wisconsin, and one or more of the ‘brown’ states. If Biden takes Georgia, then he’ll haven taken most or all of the swing states in a landslide. But the map combined with some gap-closing makes a victory really hard.

This entry was posted in Democrats, Voting. Bookmark the permalink.

7 Responses to Why I’m Nervous about the 2020 Presidential Election: It’s the Map, Stupid