Posted on July 28, 2020 by mikethemadbiologist

Unlike economic policy, where there are at least some reporters and pundits who aren’t complete fucking nitwits and understand things, epidemiology is new to most of the chattering class. This creates a lot of confusion, which is the last thing we need during a mismanaged epidemic.

I bring this up, not only because I’ve had a few conversations about this topic, but a recent Washington Post article, whose authors (or editors) are confused by this, drops sentences like:

Anne Arundel also is seeing an increase in hospitalizations, while its rate of positive test results has consistently risen, from 3.1 percent in June to 4.1 percent now….

The state is particularly concerned about the recent spike in the Hampton Roads area, including Virginia Beach, which had a positivity rate of 12.1 percent as of Tuesday, compared with 3.5 percent in early June.

The short version: the percent positive rate is not an indication of the prevalence (the number) of infected people; instead, it indicates if we are doing enough testing.

Now, that doesn’t seem obvious. After all, if the percent positive rate increases, unless the number of test is bouncing around wildly, that should be a sign things are getting worse, right? In a limited extent, this is true–it would be very unusual for the result of dividing one number by another to be completely unrelated to one of the two numbers used. But here’s a plot of the daily percent positive rate versus the number of positive cases from the same day in D.C. over the last five weeks: 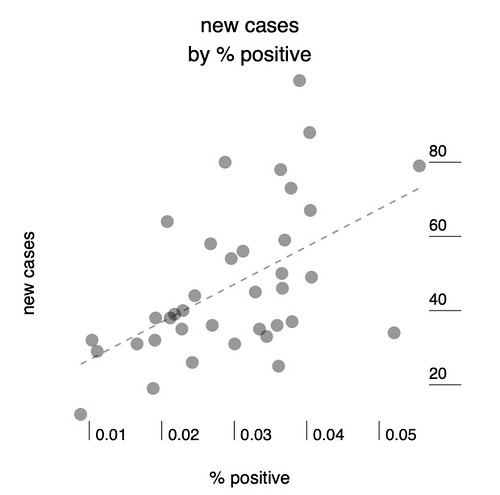 If one wants to, we can calculate R2, which is 0.28. That means there’s a relationship, as obviously expected, but it’s not particularly strong or informative. If we compare dates with different percent positives a few days apart, they’re not significantly different either, even though the percent change in the percent positive rate can be quite large (e.g., 2.8% versus 4.0%).

So what is the percent positive rate telling us? Here’s the medium length answer (boldface mine):

When there aren’t enough tests available, as was the case in New York in March, the number of cases reported will be an undercount, perhaps by a lot. That’s where case positivity rates come in: that measures the percentage of total tests conducted that are coming back positive. It helps you get a sense of how much testing is being done overall in a region.

“WHO guidelines say we want that to be below 5%,” Fox noted. When a positivity rate is higher, epidemiologists start worrying that means only sicker people have access to tests and a city or region is missing mild or asymptomatic cases. When almost all of the tests come back negative, on the other hand, it’s a good indicator that a locality has enough tests available for everyone who wants one, and public health officials have an accurate picture of all the infections, Fox said.

He gave the example of Massachusetts, where he lives. Currently, daily positive case counts have been steadily falling for the past three months. “The positivity rate is now below 2%, so I feel confident in saying that we know what’s going on, and it’s not that we’re not doing enough testing and we’re missing a lot of positive cases.”

On the flip side, any state where the positivity rate is higher than 10% is “really going to worry me,” Fox said. “That tells me that we’re probably missing a fair number of cases, and you’re not doing enough testing to see what’s going on.”

Fox noted that some states in the Sun Belt, such as Arizona and Florida, have recently had very high positivity rates, even above 20%. “That means we don’t have full visibility.”

To think about this more, imagine we have three classes of people we test. The first class contains obvious COVID-19 cases. Most of them will test positive; let’s pull a percentage out of thin air and call it 50%. The second class are people who might test positive because they socialized with people in the first class; let’s say they have a five percent chance of testing positive. Then there’s a third class, let’s say they live in the same building as the first class, but have little exposure (e.g., getting on an elevator the first group recently used, etc.) and only 0.1% will test positive.

(Again, I’m just pulling these numbers out of thin air as a toy example).

That’s what percent positive rate is telling you: how effective you are at finding cases. When we’re below five percent (or three percent, depending on whom you want to listen to), we’re testing a lot of people, and the number of positive tests is a very good estimate of the total number of infected people. At five to ten percent, we’re probably getting most of the cases, but we’re probably missing some. Above ten percent, and we’re missing cases, probably many, if not most cases (and twenty percent is a fucking catastrophe).

So percent positive rate matters because it tells us if we have a handle on what’s happening.

This entry was posted in COVID-19. Bookmark the permalink.