Most People Have No Idea What Basic Political Terms Mean

Posted on February 19, 2020 by mikethemadbiologist

I realize this probably isn’t news to anyone who teaches political science, but these two tables from a widely distributed NBC poll amuse me: 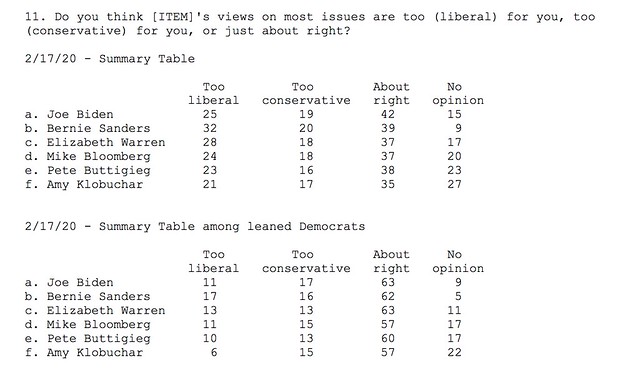 If this is to be believed, twenty percent of Americans think Sanders is too conservative. That strains credulity to say the least. What it probably means is that most Americans are kind of confused about what these terms mean.*

But all this talk about moderate versus liberal lanes in the primary seems to be bunk. Sanders, slightly more than others, is seen as too liberal, and that’s probably an effect of both Fox News and Chris Matthews and the pants-shitters at MSNBC.

Aside:. It’s probably not worth making too much of the observation that general voters are slightly more likely to think that Sanders is too conservative than Democratic voters (within margins of error). Amusing though.

Second aside: The same poll has Sanders leading the first/second choice combined by a lot. There’s still a considerable constituency for New Deal policies in the Democratic Party.

This entry was posted in Democrats, Polling. Bookmark the permalink.