Posted on April 12, 2019 by mikethemadbiologist 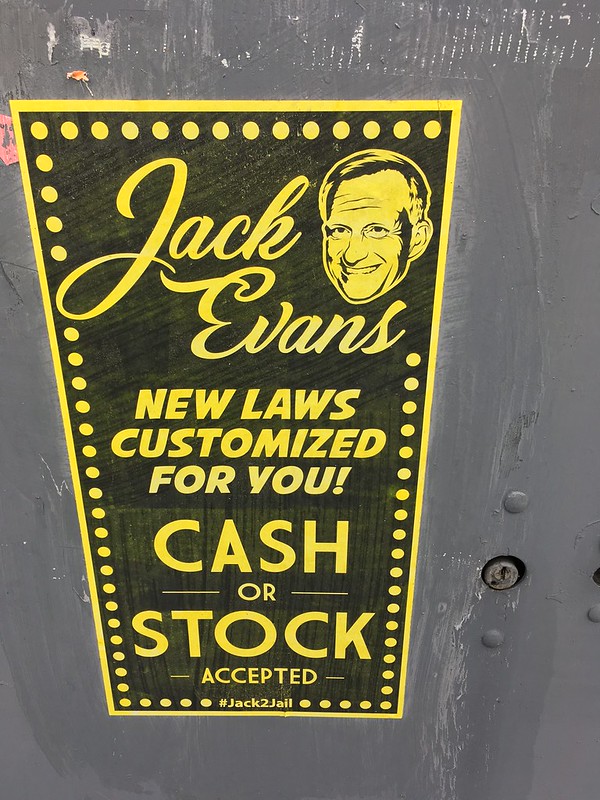 This week, long time D.C. Council Member Jack Evans (Ward 2) discovered he has a challenger. As the above image suggests, Evans has been enmeshed in a variety of scandals, to the point where he had to explain himself in private session to the Council (and several members chose not to attend). What makes this all the more remarkable is that Evans’ challenger is… his former campaign manager; Evans does not appear willing to go quietly into the night either. That’s prelude for something I noted about the sclerotic political system in the District (note I’m referring to the District, not Wor-Shing-Tun):

Having left D.C. for many years, and now living in it again, I’m struck by how much of the local political establishment is stuck in the D.C. of 1994 (Jack [cough] Evans [cough]). Leaving aside Mayor Barry and the budget crisis (band name!), it’s worth noting that the city is much more crowded than it used to be: since 1994, the city population has grown by 34 percent.

For many older Washingtonians, population decline (and stemming it), not increase, was the motto of the day. This perspective affects everything from housing policy to transportation. But the city is getting more crowded, and that has real life changes. On the plus side, many areas were unsafe, largely because they were desolate. Car traffic is worse (and four years of de facto SafeTrack Metro repairs haven’t helped). There is a housing shortage, especially in areas near mass transit. Unfortunately, most of the political establishment is still fighting the battles of the mid-1990s, not 2018.

What interests me about Evans’ challenger, Patrick Kennedy (no relation to JFK, RFK, et alia) is this (boldface mine):

But Kennedy said his campaign would not just be an onslaught against Evans, and that it would also stress local neighborhood issues and a vision for reducing inequality in a city where the gap between the affluent and the poor has been growing.

“I don’t think Jack and other decision-makers have made the transition to the challenges that come from prosperity: congestion, lack of affordable housing and displacement,” said Kennedy.

More from Kennedy (boldface mine):

“I think it’s just clear that the sensibilities of the District as a whole have moved past him,” says Kennedy. “Evans is a product of a different time, when the city was bankrupt and losing population in droves, and 400 people were being murdered a year. You did have to beg people to move to the District then. I’m not debating what the right thing was to do in 1998, but the city is in a very different place now.”

Kennedy says he doesn’t plan on just criticizing Evans during his campaign, but will instead offer residents a “positive vision.” He says he’ll focus on affordable housing and transportation, pledging to bring to fruition a network of protected bike lanes and dedicated bus lanes. But he also says ethics will be a part of his campaign: he plans on accepting public financing through the city’s new program, and says he wants to do away with outside employment for lawmakers and Constituent Service Funds. (Various councilmembers are already proposing the same.)

It’s not 1994 anymore. Time for the District to stop governing like it is.