Geography And The Trumpist Bubble

Posted on November 19, 2016 by mikethemadbiologist 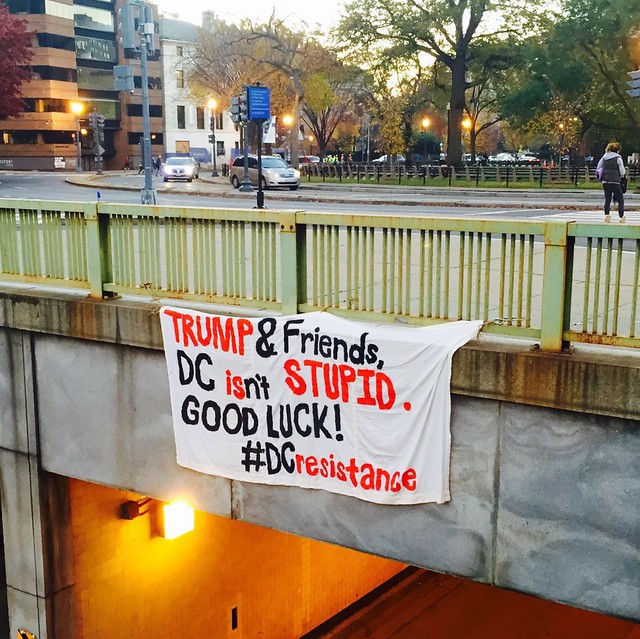 I’ve been meaning to write this for a few days, but the recent booing and heckling of Vice-President Elect and Torturer for Jesus of Gay People Mike Pence at a performance of Hamilton in New York City got me off my keister, along with this manifesto “New Yorkers Have a Duty: Be Rude to the Trumps“:

New Yorkers, it’s time to do what we do best. It’s time to start a nonstop protest campaign of rudeness against Trump and his brood.

The best part of New York is that it’s a city that speaks its mind. People here will tell you if you are in their way, if you are doing something wrong, if you are being an asshole. If we respect Trump out of patriotism or out of reverence for the office he’s about to hold or out of politeness, we are letting down the values that make New York great. Trump is an asshole, and so are his kids. Let’s tell them that.

This project has already begun. Eric Trump was harassed by teens on the street last week. Three buildings bearing the Trump name have had those five noxious letters removed because residents complained. New Yorkers have built a wall of Post-It notes inside a subway station expressing shock and anxiety and rage at the election results. But we can do more.

If you see a Trump, say something. Specifically, say, “Fuck you!” Say, “Get out of this city!”

…The president is not a king, the Trumps are not royalty; you are not under any obligation to put up with their bullshit. If you own a deli or a restaurant, refuse to serve any Trumps. If you wait on the Trumps, you have to give them their food or you’ll likely be fired, but you can give them back their tip. If you see Jared and Ivanka at a gala, or Eric in a corporate box at a Giants game, don’t acknowledge them. If people applaud the Trumps, like those patrons at Club 21, counter that applause with boos…

Being a jerk to Trump or his kids isn’t going to stop them either. But it might make them feel bad for just a split second, it might wear on them and, in time, cause them to question what they’re doing. It will, if nothing else, remind them over and over that the city they call home does not share their values, and remains angry at what they have done to this country.

What will be interesting–though I would much prefer boredom–is what happens when the Trumpkins arrive in D.C. This city has always been a Democratic stronghold, but this feels different. First of all, only four percent of voters voted for Trump–that’s worse than either McCain or Romney did against Obama. There were two precincts out of 143 where fifteen percent of votes cast were for Trump, but after that we’re basically at six percent or lower. Most of the places Trumpkins will want to live or play are going to be in very unfriendly neighborhoods.

And given the bubble the Trumpists live in–that cluelessness goes both ways*–combined with some breathtaking anger management issues, there could be some conflicts. While the city is usually pretty tolerant of political differences (it has to be), I’m not sure that’s going to happen this time.

*Pence goes to Broadway? How else did he think it would turn out?

This entry was posted in Conservatives, DC. Bookmark the permalink.

6 Responses to Geography And The Trumpist Bubble