Unregistered Voters Are One Of The Most Democratic-Leaning Groups

Posted on November 4, 2016 by mikethemadbiologist

And this is a problem. While getting the occasional Trump supporter to change his mind would be a good thing–their votes ‘count double’ (Trump loses a vote; Clinton gains one)–I would argue that there are two major groups that have been neglected. The first are ‘demoralized Dems‘, which includes registered Democrats and independents who lean Democratic. They often feel betrayed by the Democratic Party but will almost never vote for a Republican, certainly not Il Trumpe. On economic issues, they are typically left-leaning and working-class oriented. It’s worth noting that 25 percent of Obama’s votes in 2012 came from white working class voters (other estimates claim 34 percent). Not 25 percent of the white working class voted for him, but one in four Obama votes were cast by a member of the white working class.

But there’s a second group, one that dwarfs any other demographic: unregistered voters. Sean McElwee explains (boldface mine):

Using the Economist/YouGov poll, I examined net support (the percent in support minus the percent opposed) for four proposals that have been discussed frequently in the 2016 election cycle: a $15 minimum wage, single-payer healthcare, free college tuition and a border fence. As the chart below shows, unregistered Americans were more supportive of the progressive options.

Charts? We got charts: 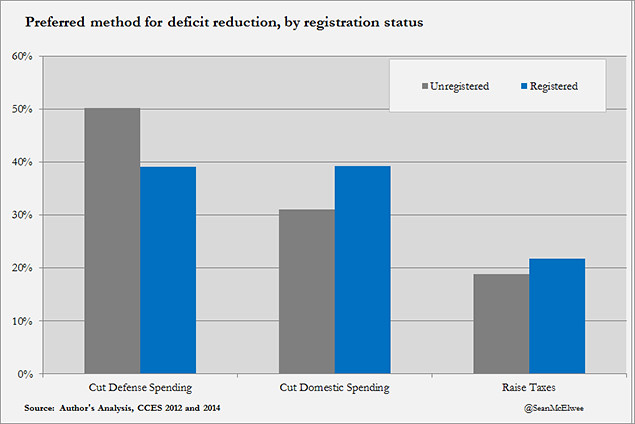 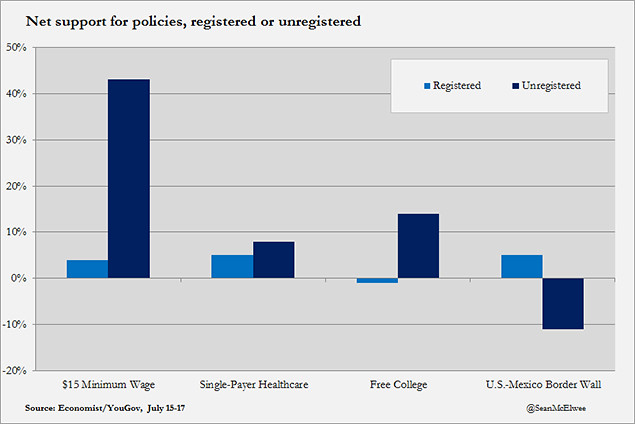 Their lack of registration doesn’t appear to be about cynicism either:

…unregistered Americans were less likely to endorse cynical views, such as believing that special interests get what they want due to political contributions and that “a lot” of government money is wasted. This suggests that being unregistered is less an explicit condemnation of the political system and more often due to other factors, such as a recent move, relative youthfulness or lack of political interest. These gaps matter, because research suggests that the preferences of voters are better represented by policymakers than the preferences of nonvoters.

If the Democrats weren’t the Dumbest Political Party In Recorded History™, they would realize that registering voters is a constant job, not just one you do several months before an election. Were Democrats to get these aligned unregistered voters to the polls, Republicans would be annihilated.

Unfortunately, you deal with the Democratic Party you have, not the one you wish you had…

This entry was posted in Democrats, Fucking Morons, Voting. Bookmark the permalink.