It Sucks To Be This Patient: The Seven CPO Edition

Posted on September 14, 2016 by mikethemadbiologist

It really does for this New Zealand (‘NZ’) patient (boldface mine):

Here, we report the isolation of seven distinct CPO [carbapenemase producing organisms–resistant to the last line beta-lactam antibiotics], together with an ESBL-producing Pseudomonas aeruginosa and Proteus mirabilis with an ACC-type AmpC β-lactamase, from a patient recently returned to NZ from a Romanian hospital…

Here’s a summary antibiogram for the seven carbapenem-resistant strains (AND WHEN WILL HILLARY SHOW US THE LONG FORM ANTIBIOGRAM SHEEPLE!): 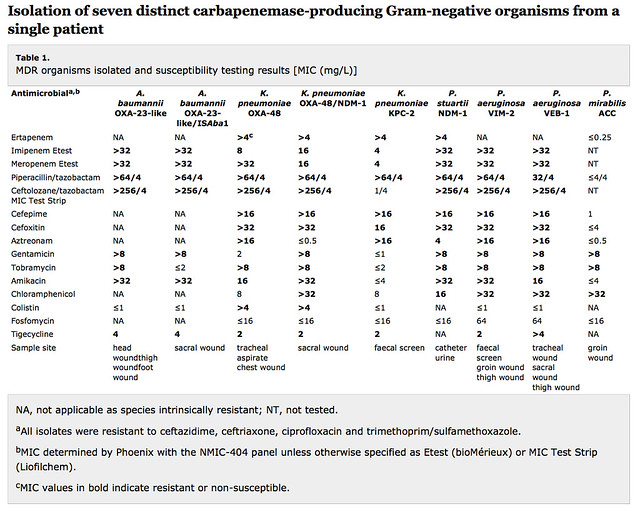 While there’s no genomic sequencing, there are still some interesting conclusions to draw. First, it looks like there could have been a case of within-patient transfer, with the K. pneumoniae OXA-48 strain acquiring the NDM-1 gene* from the P. stuartii NDM-1 strain (the resistance phenotypes seem to support this). Second, this patient somehow was with at least six different highly-resistant strains–which suggests six different colonization events***.

The good news is that each of these strains separately can be treated with an antibiotic, but it wasn’t the same antibiotic for each strain (and the article doesn’t report what happened to the patient).

*I’m guessing–consider this a very well educated guess–that most of these genes are carried on plasmids (mini-chromosomes that can move from bacterium to bacterium), but I can’t say for certain.

**I write suggests because it’s possible one or more strains could have been introduced together during a colonization event.