Posted on March 8, 2016 by mikethemadbiologist

We face a complex, intersectional set of challenges. We need solutions and real plans for all of them. #DemDebate pic.twitter.com/WfObFAmsHl 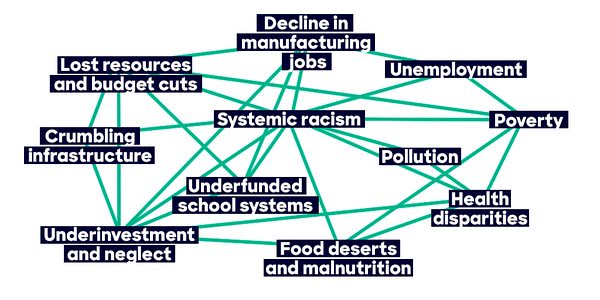 We face a complex, intersectional set of challenges. We need solutions and real plans for all of them. #DemDebate pic.twitter.com/WfObFAmsHl 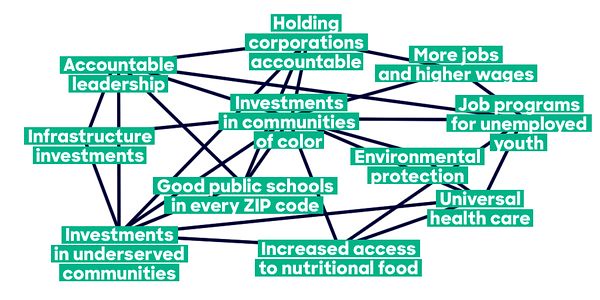 When I first saw those, I thought that either someone had hacked the Clinton campaign Twitter account or that it was a parody. Maybe it’s the sociological version of the Traveler’s Dilemma? No, it came from the campaign, not an unaligned academic.

The shame of it is that intersectionality actually is a useful concept. Unfortunately, if the theorists don’t get control over this, I think intersectionality will become the new anti-pc, anti-academia bugaboo. But I digress.

So if we take this at face value…wait a minute, I have to do this: 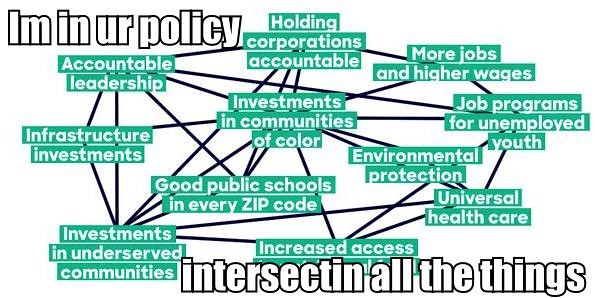 Ok, if we take this at face value, some connections (intersections?) in the solutions (slide #2) are tellingly absent:

2) Schools and food. School meals are an essential part of poor kids’ food supply. Let’s make the food better for all kids.

3) Corporate accountability and investments in underserved communities. Companies need to start investing in poor, marginalized communities. In D.C., after getting three ‘good’ locations, Walmart decided not to open any stores in poorer areas (go figure). That needs to be dealt with. Also, banks need to be encouraged to open branches in low-income areas–and if they don’t, then let the U.S. Post Office reinstitute its traditional banking services. And crack down on payday lenders–enough usurious lending (that shit is in the Bible). Maybe prosecute a bank or two–with criminal referals–that targeted minorities with higher interest rates.

4) Corporate accountability and environmental protection. The local bodega isn’t a major environmental polluter here. It’s large corporations operating with impunity. Might actually have to take them on though. Maybe a dotted line or something?

5) Housing isn’t even on the graph-like thingee. No housing discrimination, nothing about unaffordable or about decrepit, unhealthy housing (e.g., lead paint). Seriously?

This could explain how the 1993 – 1994 healthcare reform effort spearheaded by Hillary Clinton went off the rails. I kid. Mostly.

If we look at the intersectional problems (slide #1), there’s a whole mess of stuff missing, unless you’re a neo-liberal obsessed with balanced budgets:

1) Unemployment and health disparities. That this needs to be stated is galling–and could have only been put together by someone who has never been unemployed.

3) Unemployment and malnutrition. Because food stamps are so awesome [Bangs head against desk.]

What neo-liberal hooey. If your cutting edge theory leads you to the same old-same old, then it’s probably not that awesome a theory or organizing principle.