Posted on August 17, 2015 by mikethemadbiologist

Admittedly, an annoyance on D.C.’s Metro (the mass transit system) isn’t something to man the ramparts over, but there is a reason, beyond the craptacular ‘service’, why I write about Metro’s ongoing failures. But I’m getting ahead of myself.

A couple of weeks ago, Metro told me that the ventilation at the Dupont Circle Metro station would be fixed by August 1–currently, even on relatively cool days (and it’s August in D.C., so use that to scale relatively), it was around 90F in the station at 8:30am in the morning (being a science nerd, I brought a thermometer, cuz, as the kids used to say, that’s how we roll). Needless to say, I was skeptical:

…part of me thinks August 1st is the ‘date’ equivalent of a base ten number–it’s what you say when you don’t have an answer.

So, believe it or not, they had fixed the ventilation on August 1.

HA HA! I make the funny! 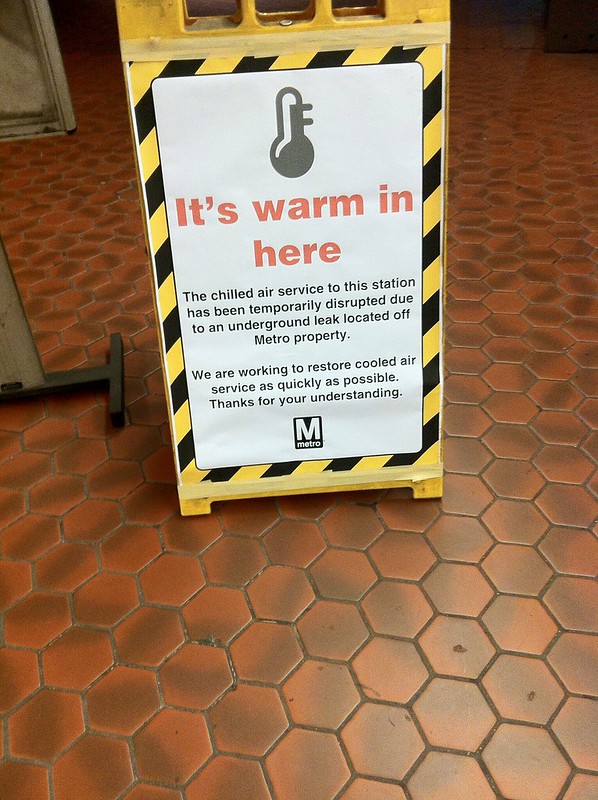 Of course it wasn’t fixed. Sure, there could be a perfectly acceptable explanation: a hard to get part wasn’t delivered, or something else went wrong. Then again, this is the same Metro that somehow simultaneously knew yet did not know that there were track problems that could and did cause a derailment–one that shut down all Metro traffic from Virginia to D.C. as well as caused massive gridlock (there’s some kind of philosophical paradox in there). So, until proven otherwise, it’s safe to say Metro was completely full of shit in its answer to me (and presumably other people).

Admittedly, a hotter-than-hell station isn’t up there with track problems or train fires that kill people. But it’s just one more instance of Metro’s utter dysfunction, which, as I put it recently, reaches “a level of incompetence that transcends ordinary corruption.” Unlike Boston’s T, where the problem is pretty straightforward (not enough money to maintain a century-old system), even local experts can’t figure out what the hell is going on (boldface mine):

Is there an internal communication problem where reports of problems just don’t go up the chain? Could Metro have fixed these problems if its leaders had just been more aware? If so, Requa needs to tell the public why this is so endemic in the organization and what he’ll do to fix it.

Or is Metro coping with such an enormous list of things being broken, where it’s simply not possible to fix them all? For each one failure that turns into a crisis, are there ten that don’t, and is Metro just triaging? If so, Requa needs to admit how precarious the situation is and say what he needs to get out of that hole.

Or is Metro’s bureaucracy so ossified that problems don’t get solved? Or are there a lot of incompetent people in the way? Or something else? If so, Requa might have to reveal problems at other levels of his own organization, but the public deserves to know this and hear some reason to believe it’s changing.

We’ve been hearing for years now that Metro has things under control, is fixing everything that’s broken, and will get back to a “state of good repair” in a few years, and then it’ll all be okay. That’s just not consistent with the reality riders are seeing, where disaster strikes and every time it turns out someone ignored warning signs.

Even someone (Danny Alpert) who spends his time following this stuff is at a complete loss to explain what the hell is going on. That’s an All-Pro level of dysfunction.

So why does this matter (other than it bugs the hell of me…)? Like it or not, D.C.’s failures of governance, including Metro, affect everyone. D.C. is full of people who are interested in government, regardless of which side of the aisle they’re on. These are typically younger people, for many of whom D.C. is the first time living in a city and dealing with local government as adults. Every time there is a failure of governance, a new cohort is taught that government is a failure and that urban living is screwed up. Neither of these lessons is helpful.

That’s a heavy burden to bear–perhaps an unfair one–but it’s clear that local leaders are completely unequal to the task.

And lives depend on it.

Update: WMATA throws in the towel.

This entry was posted in DC, Fucking Morons, Transportation. Bookmark the permalink.