Policing as an Ideology

Posted on June 8, 2020 by mikethemadbiologist 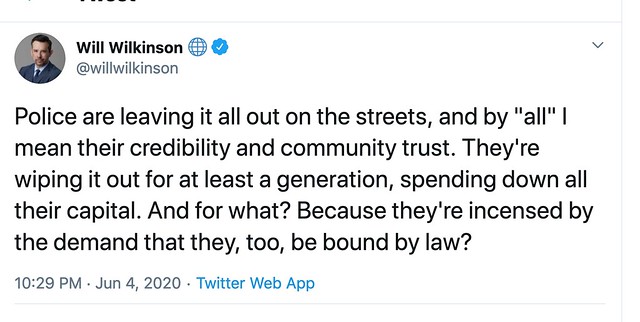 At the risk of making an actually, well, yes, actually (boldface mine):

The incidents in Chicago and Philadelphia are evidence that American police across the country share a coherent ideology. Armed white boys don’t code as a threat to them; “anarchists” and angry black people do (even if the protesters are the ones at least attempting to engage in constitutionally protected behavior, while the roving white gangs are flagrantly violating the law). That disconnect, the galling image of watching the law so obviously tossed aside under certain circumstances, highlights a fundamental truth about what’s happening across the United States. The police are not using brutality to enforce “the law.” They’re using the law to enforce something else: a particular social order that is, to them, worth fighting for.

The words “white supremacy” make some people shut their brains off (especially when so many cops are indeed black and so many people they’re brutalizing during these clashes are white), but the order, and the ideology, that these police departments, from Kansas City to Minneapolis to Philadelphia, are enforcing is one that dates back to the beginning of our country’s history, one that relies on the domination and subjugation of particular classes and groups, often out of the fear that, if given power, they would turn around and return the favor. That is what makes the response to these protests so brutal, so urgent, for the police: In town after town, they seem to ignore any course of action that might de-escalate tensions in favor of the ones that only serve to prolong the conflict.

Make no mistake: Cops have allowed other demonstrations, even very large ones, to play out with minimal or no interference. Heavily armed right-wingers marched on statehouses last month decrying measures to arrest the spread of Covid-19, and the police universally treated them as peaceful and lawful demonstrators, even as they threatened lawmakers and burned at least one governor in effigy. There were no violent crackdowns, no curfews, no brawls on the streets, no kettling or mass arrests. There was no tear gas. No major George Floyd–inspired protest has received the same courtesy, as far as I can tell. Fifty cops decked out in full riot gear descended on 14 quietly protesting students in Hoover, Alabama, on Tuesday, and arrested them all…

This disparity in cop reactions to demonstrations could be seen as a bias against the left and in favor of the right, but that’s not the whole picture. A wholly unregulated, seemingly impromptu militia is allowed to participate in the guarding of Philadelphia not strictly because it might be more likely to support the Republican president, but because it is white and vocally defending the extant system of dominance and hierarchy against those who seek to upend or even simply reform it.

…none of the good apples arrested any of those white guys with baseball bats in Philadelphia. None of the good apples enforced the curfew against them. They chose to exempt the one group that enjoys special privileges and immunity from state violence for reasons even the squishiest moderate has to acknowledge.

This is partly a result of a failure of governance:

What has been made clear over the last couple of weeks is that, in many cities, there has been a complete loss of control by ‘civilian’ authorities over local security forces. I put ‘civilian’ in quotes because the police are supposed to be civilians, even if many of them act as if they were occupying military forces. Sure, #NotAllCities, but if you look at many cities, such as New York, Seattle, or Philadelphia, the most charitable interpretation of events is that police are ignoring elected officials.

The inability to control local and state internal security forces means there is an unelected and unaccountable branch of government, with a near monopoly on violence. It has its own ideology, and because it does not have to respond to voters–that is, their fellow citizens–they are free to pursue their own ideology, even at the expense of those they govern.

As I noted last week, the creation of this unaccountable branch of government occurred in many places, including those dominated by Democrats. Hopefully, there are signs this is changing: in a local election in D.C., an incumbent, who sent out flyers the week George Floyd was killed arguing his ward needed more police, lost. There was a lot going on in that race, but that flyer was definitely timed poorly, and, in my opinion, hurt him.

One thing we must do is get voters out to vote in primaries for those candidates who want to restore accountable, elected government.

This entry was posted in Resistance Rebellion And Death, The Rule of Law. Bookmark the permalink.
%d bloggers like this: