Deplorables Still Walk Among Us

Posted on July 3, 2019 by mikethemadbiologist

And there are more of them than just a few years ago (boldface mine):

Three in ten (30%) Americans say they think it should be permissible for a small business owner in their state to refuse to provide services to gay or lesbian people if doing so violates their religious beliefs, while two-thirds (67%) say they should not be allowed to do so.

Support for religiously based service refusals have increased across virtually every demographic group since 2014, when only 16% of Americans said small businesses should be allowed to refuse service to gay or lesbian customers because of religious beliefs, and 80% said they should not.

Opinions on this issue, however, differ by gender, age, and race. More than one-third (34%) of men, compared to 26% of women, say businesses should be allowed to refuse services to gay or lesbian people. This is an increase from 2014, when only 19% of men and 14% of women agreed that businesses should be permitted to refuse to serve gays and lesbians on the basis of their religious beliefs.

Like most forms of corruption, this has spread and isn’t limited to just LGTBQ people: 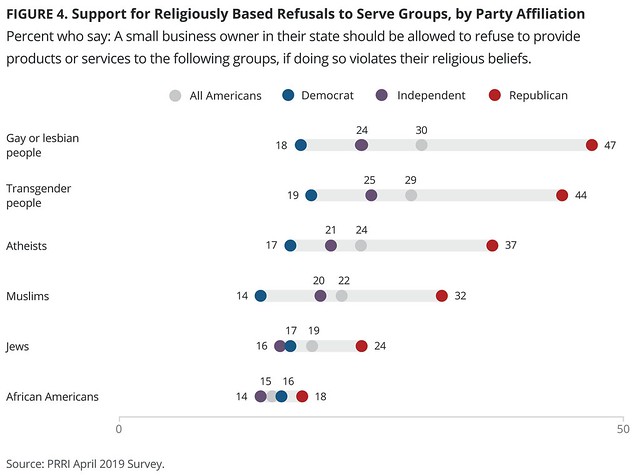 Some of this might be due to a libertarian belief that people can do whatever they want in their business. That, of course, is a repugnant belief: I don’t care why you discriminate against me, I just care that you do discriminate. Still, we shouldn’t underplay conscious or subconscious bigotry.

It’s also worth noting, as is the case with racial prejudice, that there are Democratic ‘deplorables’ too–though they vote Democratic in spite of and in opposition to their bigotry.

This entry was posted in Racism. Bookmark the permalink.

3 Responses to Deplorables Still Walk Among Us