Posted on March 8, 2019 by mikethemadbiologist

Especially pseudo-woke Twitter. A couple weeks ago, I was on the Lush Left podcast, mostly proving that, as sucky as my blog is, I give even worse interviews….

Anyway, one thing we did discuss was how Twitter isn’t anything like reality, especially sort-of left-ish Twitter. For example, look who are the two most popular candidates in the Democratic presidential primary field: 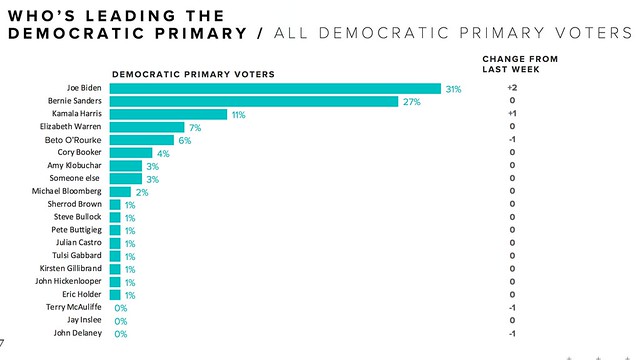 Yes, Biden and Sanders have name recognition. But Sen. Kamala Harris has been putting a lot of effort into the early states, with very little gain (or perhaps even a slight loss): 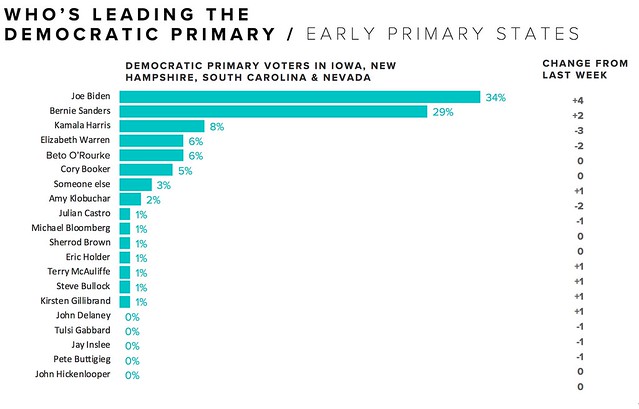 Meanwhile, people’s second choice doesn’t seem to follow from the first choice too much:

Again, name recognition probably plays a role, but Biden to Sanders is a bit of an ideological jump. Sanders and Warren supporters do seem to like Sanders or Warren as their second choice, but all of the other candidates seem to break pretty evenly between Biden and Sanders.

Interestingly, there are some differences between Biden and Sanders supporters–Biden supporters appear to have higher incomes, and have more education:

A caveat though: these differences might be driven mostly or entirely by age.

But if left-ish Twitter were to be believed, Sanders and Biden shouldn’t be getting any black support, whereas the reality is that black voters are supporting them at the same rate as everyone else. Mind you, just because an opinion is on Twitter doesn’t mean its bad–I remember in the run-up to the Iraq War being in the minority, and I don’t think we were wrong. Still, when someone claims to speak for a group of people, it should probably be taken with a grain, if not a boulder of salt. As I put it in the interview, Twitter is great for finding diverse voices; it’s usually not representative at all of the actual popularity of those voices.

This entry was posted in Democrats, Polling, TWEET!!!. Bookmark the permalink.