Posted on January 21, 2019 by mikethemadbiologist 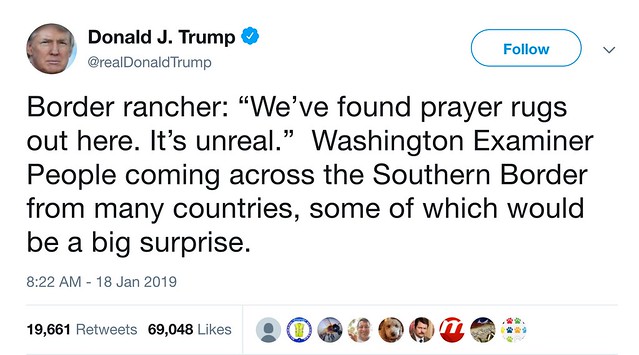 That was in response to this unverified Washington Examiner story about finding MUSLIMANIAN PRAYER RUGS11!!!11 near the Mexico-Texas order (boldface mine):

Ranchers and farmers near the U.S.-Mexico border have been finding prayer rugs on their properties in recent months, according to one rancher who asked to remain anonymous for fear of retaliation by cartels who move the individuals.

The mats are pieces of carpet that those of the Muslim faith kneel on as they worship.

“There’s a lot of people coming in not just from Mexico,” the rancher said. “People, the general public, just don’t get the terrorist threats of that. That’s what’s really scary. You don’t know what’s coming across. We’ve found prayer rugs out here. It’s unreal. It’s not just Mexican nationals that are coming across.”

Or these are just rugs used to get past barbed wire (and which can also double as blankets and a very thin mattress). But what really cracks me up is that this is the exact opening scene of the movie Sicario: The Day of the Soldado.

Some of the young’uns might not remember this, but during the run up to the Iraq War, discussions of the necessity of torture too often directly referred to the hit TV show 24.

This is so stupid.

This entry was posted in Fucking Morons, Immigration. Bookmark the permalink.