Posted on November 15, 2018 by mikethemadbiologist

A point I have tried to make repeatedly, as it bears on how Democrats can win elections in a country with a lot of white Christian bigots, is that a significant fraction of white racists vote Democratic (typically one-third to one-quarter depending on how you measure it, the particular poll, etc.). Well, this issue isn’t just limited to anti-black racism, there are Democrats who are loopy regarding George Soros, as polling data by YouGov indicates: 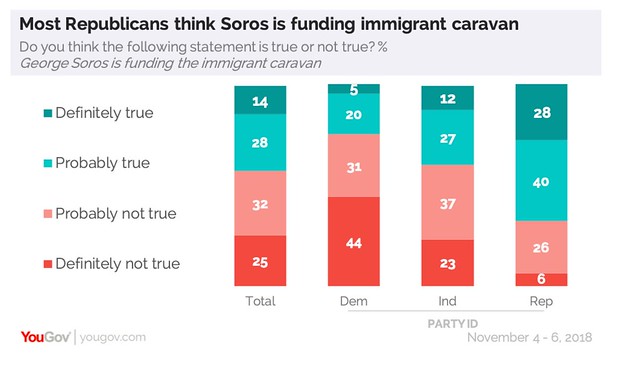 Of course, this is vastly preferable to Republicans (who clock in at 68%), conservatives (70%), and Trump supporters (78%). But there are a lot of bigots and prejudiced people–and enough of them vote Democratic in spite of and in opposition to their bigotry and prejudice for their Democratic votes to matter.

Verily, there are assholes and they walk among us. Figure out why they, despite the pseudo-woke Twitter narrative, are voting Democratic, and then do more of that.

This entry was posted in Democrats, Racism. Bookmark the permalink.