Posted on August 10, 2018 by mikethemadbiologist

It’s pretty clear that D.C. Metro’s horrible weekend service has led to a massive decline in weekend ridership–and it accounts for a disproportionate amount of the total loss in riders since the beginning of SafeTrack, WMATA’s attempt to repair the Metro which began in 2014 (following this blog’s convention, we do not recognize that SafeTrack ever ended in any meaningful sense). People familiar with Metro will know that the Orange Line has been especially hard hit by the repair schedule, and, according to a study by the D.C. Policy Center, ridership is down, down, down: 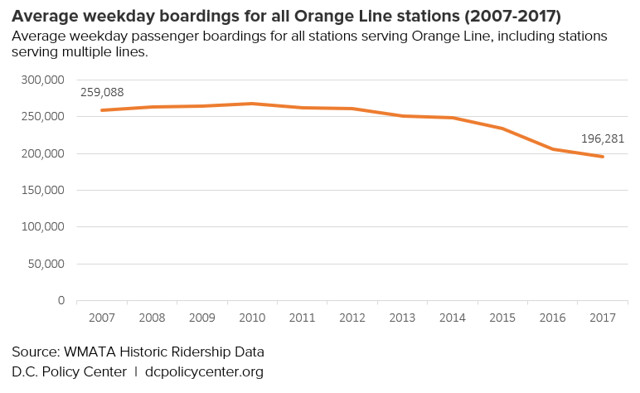 And the drop is happening at every Orange Line station, including those that don’t get a lot of use:

(the original study has an embiggened version)

Additional service from the Silver Line and mode-shift in response to delays appear to explain the more recent losses in Orange Line ridership to the west. Along the Orange Line’s eastern end (where ridership has never been particularly high to begin with), the largest overall drops have been at the New Carrollton terminus, where riders might be particularly sensitive to service disruptions and other issues that lengthen their already-long commutes.

Some of these factors, such as the Silver Line’s effect on West Falls Church, appear to be specific to the Orange Line. However, others—including the large drop in ridership at New Carrollton—likely reflect riders’ reaction to more systemic problems. To address these underlying issues, WMATA should prioritize measures which improve reliability and increase overall trunk line throughput, not only to retain but also to grow ridership. This would include looking at increasing the capacity of buses: Two of the cities which gained ridership in 2016, Houston and Seattle, did so following a reconfiguration of their bus network to focus on the highest-ridership routes. This is something that Metro may wish to analyze further, particularly with its routes close to the I-66 corridor in the case of the Orange Line. Other stakeholders, such as the D.C. government, should likewise ensure that investment decisions prioritize overall ridership growth and benefits to the system as a whole. It would also be worth examining whether direct bus routes to outlying areas where low-income employment has increased, or other mobility improvements, would be worthwhile.

It is also possible that Metrorail’s overall maintenance dilemma is modestly exacerbating changes to employment locations. If commuters are finding Metrorail service unreliable, they may have been forced to take jobs in other, less accessible locations (and, by extension, purchase or use automobiles, adding to cost burdens.) This possibility reinforces the need for WMATA to move forward on state of good repair improvements, and to ensure reliable, frequent service to meet the District and the region’s mobility needs.

The Orange Line is perhaps the most sensitive to service problems: even small delays can make getting from Virginia, especially if one is making connections, far more difficult. And Virginia has always been the most difficult state partner to wrangle when it comes to budgets. This is not helping.

This entry was posted in DC, Transportation. Bookmark the permalink.