Posted on April 10, 2018 by mikethemadbiologist

While I don’t want to get into the whole clash of Democratic personalities (Dear Dems, grow the fuck up), Senator Sanders was right: the Democratic Party was shellacked in 2010, and has declined since. Here’s the total number of state legislative seats held by Democrats and Republicans since 1997: 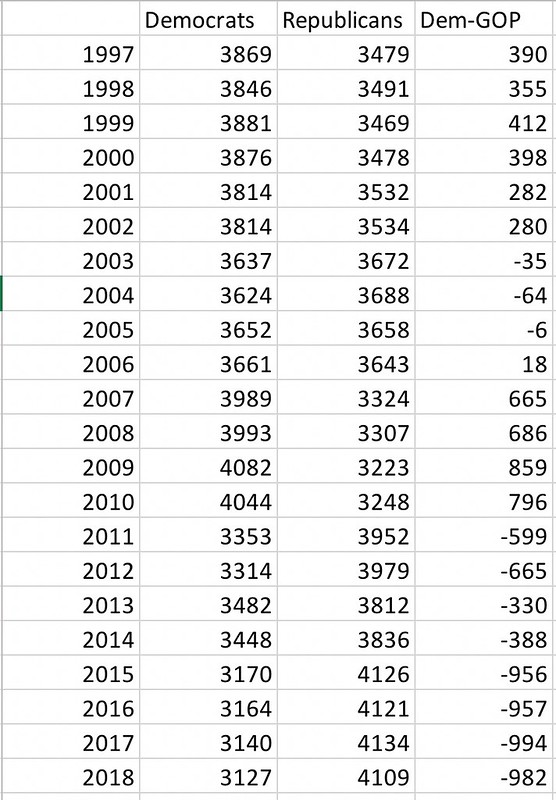 There are three ‘waves.’ (note that I’ll be referring to starting session dates, so the 2009 ‘election’ refers to the 2008 election results). The first wave is in 2003, when Little Lord Pontchartrain’s wartime popularity cost the Democrats several hundred seats. The second was in 2007 when Little Lord Pontchartrain’s new unpopularity cost Republicans several hundred seats. And Obama’s coattails in 2009 added around 100 seats. Then the 2010 midterms (2011 data) cost the Democrats over 700 seats, far worse than 2003 or 2007. And redrawing legislative districts after the 2010 census didn’t do much either way–Democrats regained over 100 seats in 2013. Then there was a further second midterm collapse costing an additional 300 seats, leading to a total loss of 911 seats during Obama’s term.

It’s just as bad when we look at legislative control: 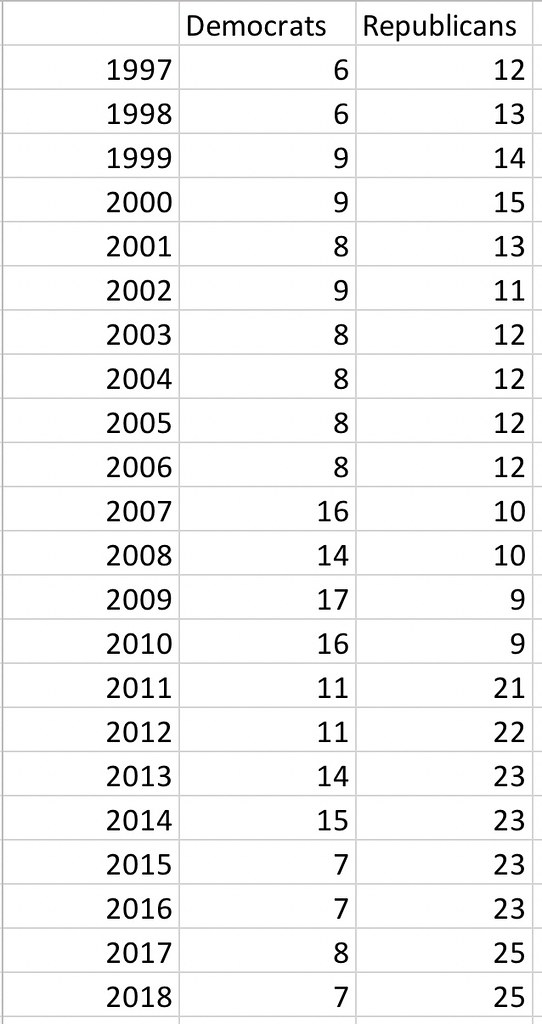 Democrats had low turnout in 2010 and 2014, and that’s reflected in the state legislature numbers. Surprisingly, depressing the base isn’t a good political strategy (and, yes, Republicans went scorched earth, but Democrats, including Obama, didn’t have to fuck up TARP or try to cut Social Security multiple times either).

Anyway, Sanders was right: in recent history, Obama presided over what can only be called a collapse of the Democratic party. To blame Obama alone is foolish–there are many Democrats responsible for this failure (though had Obama presided over a 900+ seat gain, he would be receiving more credit than he deserves for that too). But we really can’t blame the Russkies or twitterbots for the losses in 2014. The first step to recovery is letting go of various Derangement Syndromes and recognizing that the past and current leadership of the party has failed massively.