Older GenXers Are Still Getting The Shaft

Posted on December 7, 2017 by mikethemadbiologist

I’ve never really been a fan of the Generational Conflict genre. It ignores how some people in every age cohort are getting screwed or have their hearts in the right place. But sometimes, the generational pattern is so strong, it’s foolish–and more importantly, harmful–to ignore it. So…

Those GenXers who came of age during the first Bush adminstration and the first couple years of the Clinton administration continue to get the shaft (don’t worry millennials, we’ll talk about you soon!). It’s worth noting that the job market circa 1991 was the worst it had been in nearly twenty years, and there hadn’t been anything like it until 2007-2008. I will gladly posit that millennials have had it worse in absolute terms: there hadn’t been an additional fifteen years of rising income inequality, corporate takeover of the regulators who were supposed to protect us, and crapification of public services and infrastructure. But millennials do have the small advantage previous cohorts (including GenX) to tell them they were getting screwed.

That subcohort of GenXers was the first generation to realize their futures might be worse than their parents’. Being the first generation in many decades to experience this meant that too many GenXers really didn’t have the language or even the ability to recognize that things were changing for the worse. After all, if they just sucked it up and put the work in, things would get better–that worked for us (‘us’ being older generations). The belief that there was a rigged system, a stacked deck, and that GenXers were right to believe so was viewed as laziness. Slackers, if you will. In 2017 terms, it could have been called Generation Gaslighted. Even though it turns out GenXers were right to think so (boldface mine):

As people get older, they tend to become more at peace with their finances, survey research shows. But not the current crop of middle-aged Americans.

Let’s call them the Grumpy Middle.

They are unhappier than previous generations. And they’ve been this way for years.

Typically, people 45 to 54 are more likely than others to say they are “pretty well satisfied” with their financial situation, according to the University of Chicago’s General Social Survey. Then the generation born between 1962 and 1971 started to reach their current age range — and bring their longstanding economic dissatisfaction with them.

Following the Grumpy Middle over time in the survey reveals that they have been less happy than other respondents as far back as the early 1990s, when most of them were in their 20s.

Americans in their 20s and 30s have always expressed a higher degree of anxiety, but this is the first time in the survey that the dissatisfaction has crept so far up into middle age.

Middle age used to be the peak earning years on the job market, but this is no longer true, especially for men. People 45 to 54 are still earning more than than younger colleagues. What’s changed is on the other side of the age matrix: Older workers have increasingly gained ground on the income scale. The older they are, in fact, the more rapid the ascent up the income rankings…

Today, women still face a big pay gap with men, but among female workers there’s still less age disparity. For both genders, however, older workers — especially the rapidly growing pool of boomers over age 65 — are holding a growing share of the high-paying jobs.

The Grumpy Middle got to college around the time the drinking age was raised to 21 and were too young to enjoy all of the benefits of the booming 1980s economy, but old enough to have worked with older colleagues who could regale them with tales of how great things were for white-collar workers in the 1980s.

Today’s older generation lived and worked through one of the greatest economic times in modern history. If they invested along the lines of the broader market, they reaped huge rewards. If they bought a house, it probably appreciated significantly. If they worked for a corporation, they are likely to have a generous retirement plan.

And in a figure: 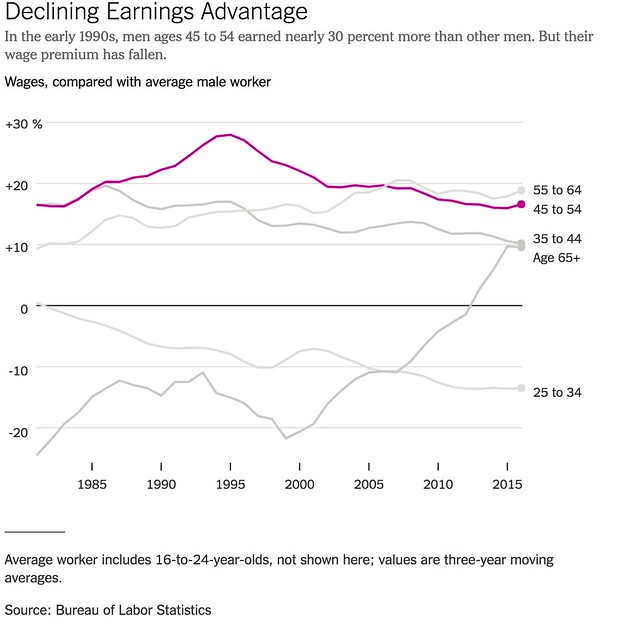 And now we have a Baby Boomer Congress empowered by white Baby Boomers that is shredding the future safety net (theirs will remain largely intact) even further in a last-ditch effort to strip the house down to its copper fittings. Anger is the appropriate emotion. And economic policies slightly to the right of Hubert Humphery are the appropriate solution (BERNIE BROCIALISM! BOOGA! BOOGA!)

GenXers and millennials unite, you have nothing to lose but your chains?

This entry was posted in Bidness, Economics. Bookmark the permalink.

1 Response to Older GenXers Are Still Getting The Shaft