Posted on August 15, 2017 by mikethemadbiologist

And Charles Pierce too. Before we get to Reid and Pierce, it’s story time! Many moons ago, when Senator Holy Joe Lieberman was still in office, he was being interviewed by Charlie Rose and the subject of campaign finance reform came up. Lieberman said something like, “Charlie, $2,000 isn’t going to buy a senator’s vote.” And Rose flubbed it. Rose should have asked, “Well, how much would it take to buy a senator’s vote?” This isn’t a trivial, snarky question. At the time, people known as ‘bundlers’, who had networks of donors, each of whom could (and would) give the maximum to candidates, had considerable influence over candidates. $2,000 might not influence a senator, but what about $2,000 x 250? (And in that pre-Citizens United era, that was a lot of money. Almost seems quaint.)

With that as prelude, Joy Reid over the weekend launched a spirited defense of Senator Kamala Harris, leading to this tweet: 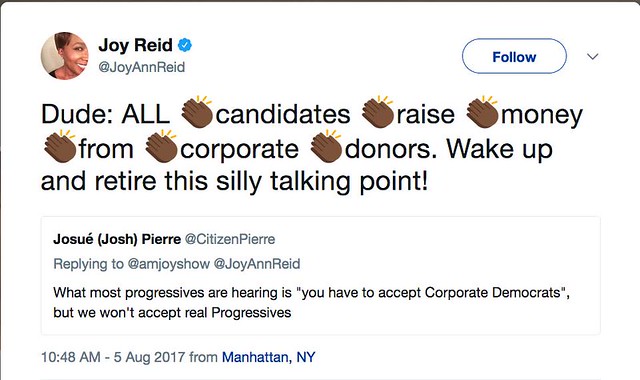 Charles Pierce chimed in as well. But this is a breath-taking admission–and a blown opportunity. Let’s assume that Reid is correct. And let’s assume that most corporate donations are neither misusing corporate money to pursue a private political agenda (which would be a bizarre, warped form of altruism) nor a massive scam perpetuated by Democratic office holders (who get donations, but then completely ignore the donors).

So there are quids and they lead to quos. If this is the case, shouldn’t Democratic voters know who is beholden to whom? What are Harris’ donors expecting? And for that matter, Elizabeth Warren’s, Kirsten Gillibrand’s, Deval Patrick’s, and Cory Booker’s? Even Sanders, who doesn’t take corporate donations, is affected by this: rural-ish lawmakers from small states with small campaign warchests can get (and have been) steamrolled by massive funding campaigns by the NRA–which goes a long way to explain his relatively weak position on guns and gun control (which, sadly, is still better than most Republicans’). We might even get a discussion of clientelism.

By the way, isn’t this also an important news story as well? One would think professional considerations would make this worthy of coverage. I’m not naive about this, but cynicism doesn’t help: explaining what particular politicians are giving in return for corporate support is important. For instance, if a corporate donor is associated with ‘social impact bonds’–essentially, a mechanism to private public goods, such as education and criminal justice–we might want to know that. Teachers unions, for example, are concerned about privatization, and criminal justice organizations, along with Black Lives Matter, are concerned about the criminal justice system.

The weird thing is that Democrats used to get this–at least until 2016 (boldface mine):

For most of my time on the Online Left I thought it was pretty much generally accepted that the Democrats were not quite as Good as they should be, and while pragmatism (gotta get elected, gotta raise money, gotta deal with bad apples in your own party, etc…) was acknowledged – and debated – it wasn’t especially controversial to say things like “politicians are influenced by big donors and corporate interests more than they should be” even if what to do about that was not always agreed upon.

Now this is apparently a crazy BernieBro view and pointing out that, say, 5000000 emails in a row from the DCCC informing us that we’re all going to die unless I contribute $5 to their latest scam, might not actually be a strategy designed to win elections, is just proof that people are employed by Jill Stein and also, too, Russia.

The powers that be are not all Good. Some are better than others. This didn’t [used] to be controversial. That Trump is Bad does not change this.

So instead of hectoring rank-and-file Democrats about purity, how about covering possible conflicts and asking hard questions? If only there were people who had a job with resources to do this. If only…

This entry was posted in Bidness, Democrats. Bookmark the permalink.

2 Responses to Joy Reid Misses The Lede About Corporate Donations