Posted on February 13, 2017 by mikethemadbiologist

One common conservative claim is that cities, full of those people, are leeches that take a lot of money from ‘real Americans’ to pay for all of their lazy poor people. While the claim appears ridiculous (among other things that could be said about it), it’s hard to refute since it’s difficult to break down how much tax money is collected and spent by individual cities within states. However, we have what biologists call a natural experiment: the District of Columbia (D.C.). It’s a city, but in many statistical ways, D.C. is treated as if it were a state (which it should be, as it’s larger than both Wyoming and Vermont).

So how much does D.C. pay in federal taxes? Well (boldface mine):

In 2014 the District paid the federal government $26.4 billion which is likely the largest contribution in the city’s history. The District only received $3.5 billion in federal grants, payments, and court contributions in fiscal year 2014 – a difference of roughly $22.9 billion (this excludes matching federal funds such as those we receive for Medicare, but all states receive these).

Some numbers to put that $10.9 billion in context using 2016 budget numbers–which are higher than 2014 (budget numbers include all sources of revenue):

Now consider what $11 billion headed back to D.C. every year would mean in terms of what the District could provide to its residents.

This is a massive subsidy by D.C. relative to its budget and state GDP: 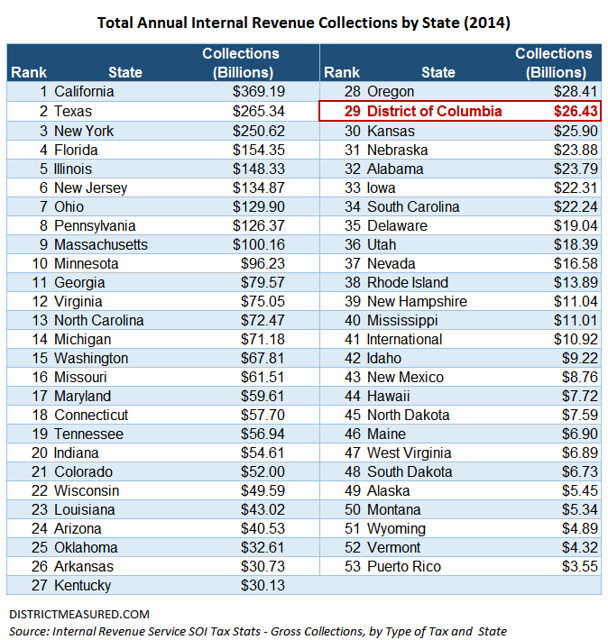 So, no, cities are not parasitizing your ‘real America.’ It’s the other way around.

Meanwhile, that’s not stopping the denizens of Congress from mucking about with D.C. for political gain either. This is why our state license plates bear the motto “Taxation without representation.”