The Politics of Hopelessness

Posted on March 5, 2016 by mikethemadbiologist

I’m tired of feeling like we’re losing even when we (sort of) win (boldface mine):

Amid all the accusations that Hillary Clinton is not an honest or authentic politician, that she’s an endless shape-shifter who says whatever works to get her to the next primary, it’s important not to lose sight of the one truth she’s been telling, and will continue to tell, the voters: things will not get better. Ever. At first, I thought this was just an electoral ploy against Sanders: don’t listen to the guy promising the moon. No such thing as a free lunch and all that. But it goes deeper. The American ruling class has been trying to figure out for years, if not decades, how to manage decline, how to get Americans to get used to diminished expectations, how to adapt to the notion that life for the next generation will be worse than for the previous generation, and now, how to accept …low to zero growth rates as the new economic normal. Clinton’s campaign message isn’t just for Bernie voters; it’s for everyone. Expect little, deserve less, ask for nothing. When the leading candidate of the more left of the two parties is saying that — and getting the majority of its voters to embrace that message — the work of the American ruling class is done.

Because I don’t see either likely Democrat or Republican presidential candidate, never mind Congress, doing anything to alter this: 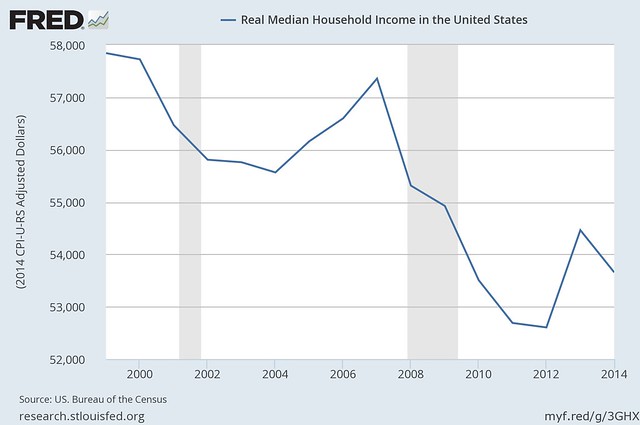 A quarter century of voting for the least awful alternative gets tiring.

This entry was posted in I For One Welcome Our Austerity Overlords, We're Really Fucked. Bookmark the permalink.
%d bloggers like this: