Yes, This Is a Coup

Posted on July 13, 2015 by mikethemadbiologist

From Politico EU (boldface mine; screenshot below the fold):

THE FUND THAT COULD MANAGE GREEK ASSETS:
Germany has suggested one particular institution – KFW – could manage Greece’s assets and some of their reform efforts. But who’s behind this little-known “Institute for Growth”? It’s the government-owned bank, KFW.

KFW’ CEO Ulrich Schröder spent 20 years at WestLB (and six years at a spin-off) – a bank which received four government bailouts since 2008. Also on the board are none other than German Finance Minister Wolfgang Schäuble and Economy Minister Sigmar Gabriel.

More on “Institute for Growth” that wd manage #Greece assets: CEO Ulrich Schröder had 20yr at WestLB (4 bailouts). Schäuble+Gabriel on board

Mad Biologist: Let’s ignore for now the insanity of Germany, of all countries, not realizing the political implications of forcing debts in an uncontrolled (by the debtor) currency to be repaid in full. Because that worked so well before.

This is nothing more than an usurpation of Greek sovereignty without the consent of the Greek people (the referendum was pretty clear on that score).

I can’t see how this ends well at all, for Greece or Europe.

…it is increasingly clear we are witnessing one of the most daring raids on national democracy in post-war political history. If this new plan passes the Greek parliament, Greece can no longer be said to be a genuinely sovereign state. Brussels and Berlin are taking over Athens. Even one of Alexis Tsipras’ minor victories – that a £50 billion privatisation fund would be based in Athens, not Luxembourg – was entirely superficial. As Angela Merkel insisted this morning, it would not be under Greek control…

But even if one puts all that to one side and accepts the idea that Greek democratic will has rubbed against that of other eurozone members, the deal is indefensible. It suggests there can be no sovereignty for debt-ridden countries within the eurozone. It’s not just that countries are prevented from pursuing an independent economic strategy which might help them recover, such as devaluing their currency. Members always knew that was a precondition of entry. It’s that the entire political decision-making process will be presided over by bureaucrats from outside the country in which the decisions take place.

A foreign-managed financial institution will sell off Greece’s assets and control how that money is then spent. It seems inevitable European officials will have the chance to veto Greek economic legislation. After all, how else could this process exist? Greek sovereignty is incompatible with the terms of the deal. 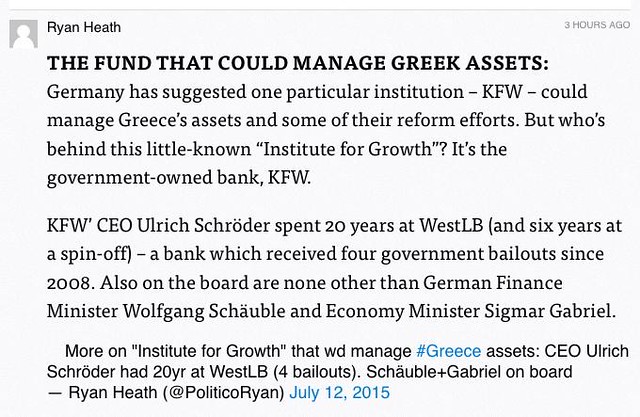 This entry was posted in Bidness, Fucking Morons. Bookmark the permalink.

2 Responses to Yes, This Is a Coup