“She Called Us Thugs”: A Class Divide As Well

Posted on May 9, 2015 by mikethemadbiologist 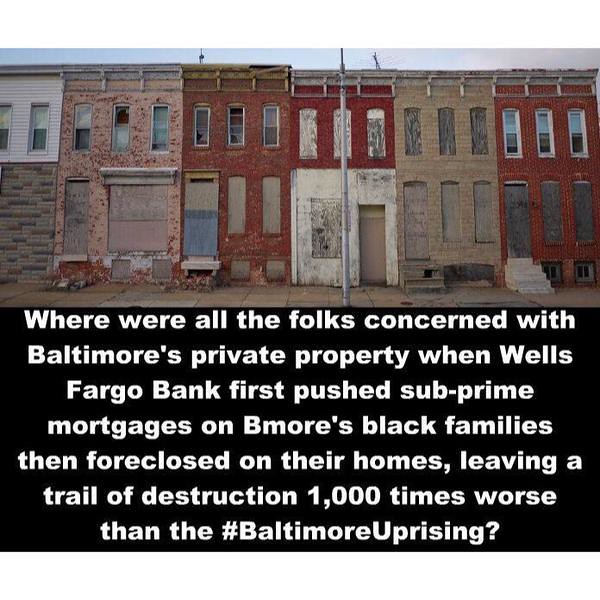 One of the things that has gone missing in the discussions of recent events in Baltimore is the role of class. As we like to say around here, there are never any Marxists around when you need them (with the exception of Jacobin, but we’ll get to that in a bit). When economic status is referred to this NYT op-ed, the word poverty is used, as if it were (solely) a public health condition, not as if it were an identity. Because economic class is not just condition, but an identity, as are ethnicity or religion. Like all identities, the identity of a particular class is both internally constructed and externally enforced.

When trying to understand this sort of stuff, it’s always worth looking at the edge cases, the exceptions, the oddball instances. I’ve noted before that you can’t really understand gentrification until you consider the ‘white-on-white’ gentrification in Boston’s North End and South Boston. Those examples highlight certain economic factors, as the racial causes and effects are absent in these two cases of gentrification.

It’s worth noting that Baltimore, along with D.C., has a well-established black power structure. Moreover, there is a black upper middle class, gentry class, and upper class. And that leads to something like this (boldface mine):

With buildings ablaze and looters rampaging through city streets, Mayor Stephanie Rawlings-Blake faced television cameras Monday night and sternly denounced the rioters as “thugs.” The next day, with some black residents in an uproar over a word they call racially charged, she walked it back.

“There are no thugs in Baltimore,” the mayor, who is African-American, said at a church, where she met with members of the clergy. “Sometimes, my own little anger translator gets the best of me.”

The episode demonstrates the fine line Ms. Rawlings-Blake, 45, walks as she tries to lead this majority black city out of what she calls “one of our darkest days.” It is also a vivid reminder that the presence of a black mayor (and black police commissioner) does not guarantee a bond or rapport with poor black residents that might help calm a city going through the kind of trauma facing Baltimore….

With her elite upbringing (her mother is a doctor, and her father was one of Maryland’s most powerful politicians) and serious, reserved political style, Ms. Rawlings-Blake has not endeared herself to people in Baltimore’s most blighted neighborhoods, where she is seen as out of touch. Now Mr. Gray’s death has exposed those tensions as never before.

“A lot of us don’t like her,” said Jasmine Squirrel, 25, a high school classmate of Mr. Gray’s. “She don’t really do a lot for our city, the inner city, the schools and the youth. We don’t see her face in our community — the only time we did see her was around the time when it was time for her to get elected. The only reason why she’s out now is because they tore it up.”

….Whether that will change as a result of the Gray case remains to be seen. Carl Stokes, a member of the City Council, was among those criticizing the mayor for her use of the word “thugs.” On CNN, he likened it to the word “nigger.” Mr. Stokes says Ms. Rawlings-Blake does not “have her ear to the ground,” and pays more attention to developers than poor people.

…At the Academies at Frederick Douglass High School on Wednesday, where the hip-hop artist Wale made a surprise visit as part of an effort by the school system to manage anger over Mr. Gray’s death, Montrez Watt, 17, trembled as he spoke of it. “She doesn’t understand,” he said. “She called us thugs, yo.”

Mayor Rawlings-Blake has to know what thugs means today (I’m old enough to remember when it referred to Saddam Hussein’s minions. But I digress). There are any number of other ways she could have expressed herself. Yet, in a moment of anger–and probably honesty–she showed some real class bias. This was a gaffe in the true sense of the word: she admitted something she wanted to keep secret (she later apologized). Rawlings-Blake comes from a well-to-do, politically connected family*. It’s not that she has bad intentions (I don’t believe she does), but there is a class divide there. At some level, Rawlings-Blake just doesn’t identify with the people of Baltimore’s poor neighborhoods–and that bias can lead to very bad policy (gaffes are just the tip of the iceberg)

So let’s bring in the socialists (seems Marxists are really hard to come by these days). While Shawn Gude at Jacobin is writing about a white liberal columnist, his comments are probably appropriate for a mayor who refers to her constituents as thugs (boldface mine):

“The dream of the Next Baltimore is cracked.”

What was the cause of Rodricks’s lamentations? The destruction of a handful of police cars, it seems, and the smashed windows of some businesses in Baltimore’s Inner Harbor.

And the “Next Baltimore” occupying his imagination? A vision built not on pouring investment into long-neglected communities, but attracting young professionals and tourists. It’s a vision that left intact racial and class inequality — even as it trumpeted inclusiveness and opportunities to come….

But of the entire scene, the most salient thing wasn’t the destruction wrought by protestors — the cop car demolished, the payday loan store smashed up — but by capital: the decrepit, boarded-up row houses, hovels and vacants in a city full of them.

These are the streets in which Maryland Gov. Larry Hogan has now declared a state of emergency, the same streets that would suffer from his austerity. They are the streets that have endured astronomic unemployment rates for decades, even as Democrats have run the city unrivaled. And they are the streets where police folded up Freddie Gray’s body “like origami,” then restrained him with leg irons in the back of a police van and delayed calling for an ambulance.

Obviously, race plays a large role, both in the spark of police brutality and the long-term economic neglect and exploitation of poor black communities, as well as the War on Drugs. But there’s a class element to the brutality as well, among black and white. This identity leads people to rule out–or desperately try to ignore–certain problems (as the image above notes). An well-to-do person will generate a lot of cognitive dissonance if she blames her class’ economic activities and livelihoods for her city’s devastating problems. If we ignore that, we will miss many of the necessary solutions to truly integrating our cities.

*So does D.C.’s Mayor Muriel Bowser. It’s worth noting that in the Democratic primary (which is essentially the election in D.C.), Bowser won the white districts, but not the black ones, even against a mayor troubled by multiple scandals.

This entry was posted in Racism. Bookmark the permalink.

1 Response to “She Called Us Thugs”: A Class Divide As Well