D.C. Residents, We Are Not Stopping COVID-19

Posted on May 4, 2020 by mikethemadbiologist

In fact, we’re not even close. We’ll get to that in a moment, but please don’t do this (boldface mine):

Eater DC editor Gabe Hiatt flagged the situation on 14th Street, where customers appeared to be gathering on the patio at Red Light Bar. While delivery and takeout orders are allowed under the mayor’s order, sit-down businesses remains barred.

People are using the tables at Red Light but mostly drinking pouches from Pearl Dive. The line there is spaced apart but spilling down the block and around the corner https://t.co/gcupaW4E7V

When reached by phone, a manager at Red Light who identified herself as Annie said the bar is only open for delivery and take-out, and that the customers gathered on the patio were waiting for their orders. When it got out of hand, the bar politely asked the customers to leave, the manager says.

Interim Deputy Mayor John Falcicchio told DCist over Twitter direct messages that while he only saw the image on Twitter and wouldn’t want to “adjudicate a particular incident without direct knowledge of it,” the photo of people gathered on the patio with wine and drinking glasses is of concern. “That would likely not conform with the current restrictions,” he says.

There are also reports of restaurants in Georgetown ‘accidentally’ doing this as well*. Yesterday, I saw a lot of people in reasonably crowded areas not wearing masks, and people weren’t attempting to maintain adequate distance either. While I don’t think that’s the major mode of transmission, what too many in D.C. don’t seem to realize is that we’re nowhere near close to being where we need to be, even if we were to use the most lax reopening plan, the one promoted by AEI, a conservative, pro-business think tank.

Here’s the number of new cases per day in D.C. since April 1 (data from here; because of data problems**, I’ve left off April 30 and May 1–if they were included, the trend might be increasing–hopefully, the May 3 data, which will be released shortly after posting will be the start of a downward trend): 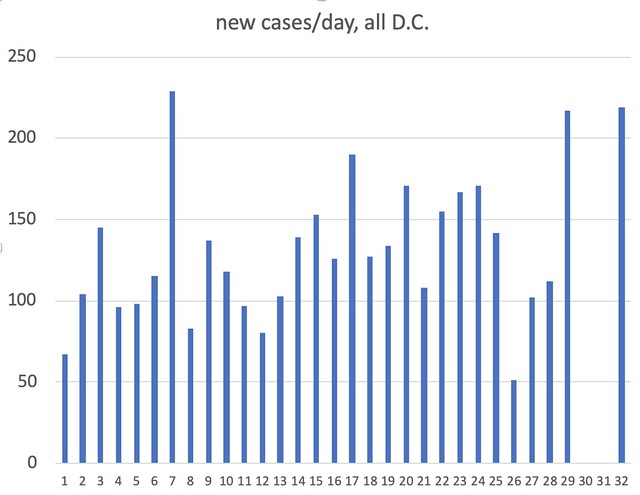 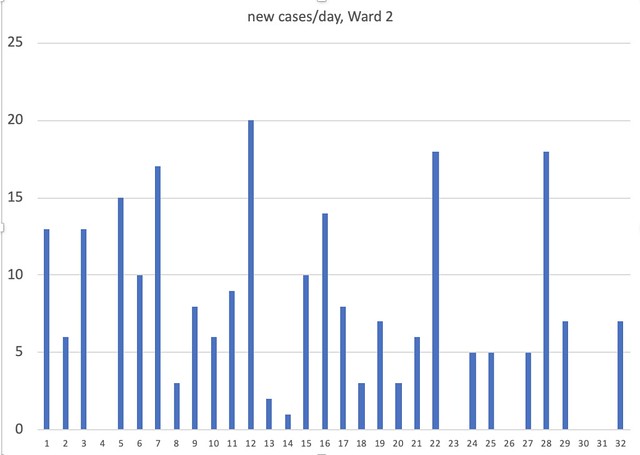 Nor is Ward 3–though maybe we can hope Ward 3 is beginning to decline (maybe?): 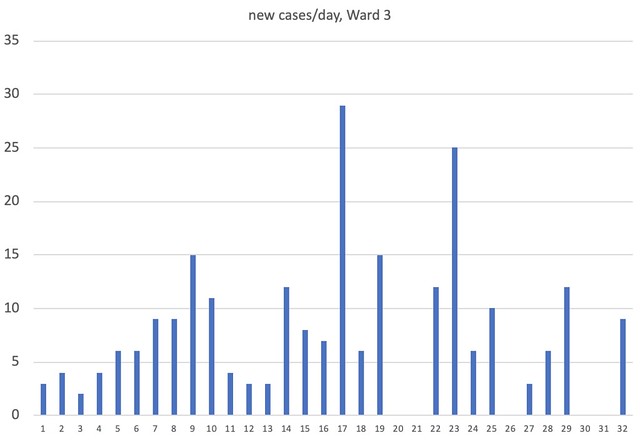 And Ward 8 is getting hammered: 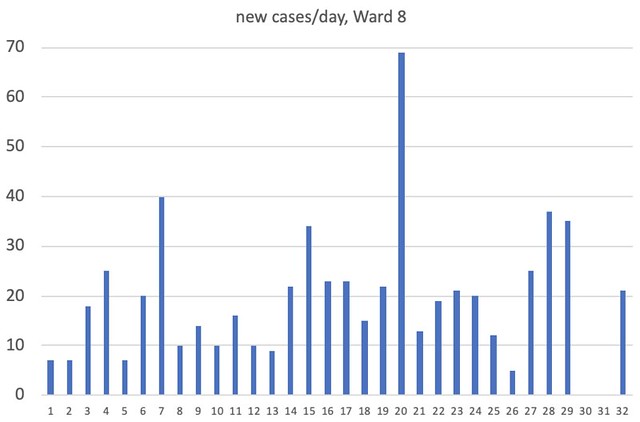 We’re not close to having fourteen days of decreased cases, which is the AEI standard for reopening. We also have too many cases given D.C.’s testing and tracing capacity (though we could alleviate the latter by paying laid off restaurant workers and bartenders to do contact tracing). D.C. is testing around 600 people per day. That sounds like a lot for a city of 710,000 people, but many of those tests are being deployed in sick patients, institutional settings, and emergency services workforces (medical workers, police, fire/EMT).

Until D.C. dramatically lowers the number of new cases, we simply won’t have the ability to any significant test and trace, and without that, we’re not going to bend the curve, especially if residents aren’t willing to do whatever they can to limit spread of SARS-CoV2.

As David Wallace-Wells noted at the national level (boldface mine):

Pulling up short of 75,000 deaths means, in other words, an incredibly abrupt conclusion to the pandemic, with deaths going all the way to zero very soon and staying there permanently. That is not going to happen. For about the last two weeks, the country has been on a roughly flat trajectory of about 2,000 deaths per day. If it stays on that plateau through August 4, it would mean not 12,000 more deaths, but 180,000. And the pandemic wouldn’t simply end on August 4 just because the modeling does.

D.C. won’t get off its plateau until we stop doing all the stupid stuff. You can’t argue your way out of social distancing. The virus, like Honey Badger of halcyon days of yore, doesn’t give a shit. That said, we can protect ourselves and greatly reduce the damage if we change our behavior (mask wearing–to protect other people from you–in public would be a good start). But it’s not clear to me that D.C. is willing to do this. So more deaths, it is then.

*Red Light has now stored their seating in such a way that it can’t be used.

**the ward-by-ward April 30 data are identical to the April 29 data, so getting a daily change doesn’t work for April 30 and May 1.