A Simple Case for Impeachment

Posted on April 15, 2020 by mikethemadbiologist

On Sunday, the NY Times actually committed some very good investigative reporting in which they received over eighty pages of emails but her emails! from U.S. public health officials. As you might imagine it’s incredibly damning–you really should read the whole thing. But this particular email portion is really awful and succinctly captures what Trump et alia did wrong: 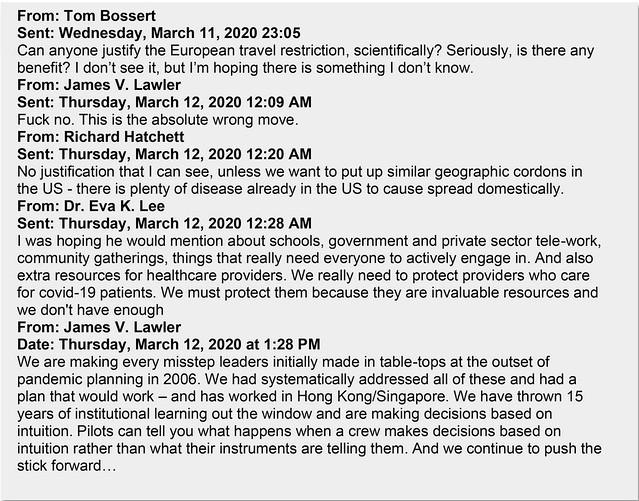 I have no idea if impeachment is feasible, but Democrats need to be shouting from the rooftops about this–and calling people to testify. To hang this around Trump’s neck, which must happen to stop the American Carnage and save us, you must tell people what he did wrong (this goes for Biden too). It shouldn’t be hard to say something like this (boldface mine):

That is not the only conclusion we can draw from the Times’ dates, names, and unearthed documents. To be sure, the botched pandemic response was also due to infighting between Trump’s myriad incompetent factions, with a “travel ban” being pushed by China hawks after the virus had already landed in the United States even as Azar’s team struggled to get Trump’s attention. But [it] is absolutely clear that the Trump White House had all necessary information to act on the emerging pandemic in January, and that it was Trump’s own pathologies that prevented action from being taken. Trump’s intolerance for bad news or unflattering information meant government experts needed to walk on eggshells to even broach the subject; Trump’s paranoid insistence on a “Deep State” conspiracy against him meant he steadily ignored expert warnings in the apparent sincere, idiotic belief that government experts were out to sabotage him. In his delusions and incompetence, Trump actively blocked government from executing already-laid plans to prevent the pandemic’s spread.

It took until mid-March, until the stock market had collapsed, the virus was widespread and states were issuing shelter in place orders until a “shellshocked and deflated” Trump finally absorbed that the reality of mass deaths were not something he could hate-tweet his way around. But it is not over, and he is not done doing damage. He remains paranoid, delusional and defiant, continuing to threaten to “re-open” the economy regardless of expert advice.

It is unforgivable incompetence. It is unforgivable arrogance and self-dealing and cheap, nasty careerism, on the part of each and every grotesque administration toady allowing Trump to kill Americans, willingly, through intentional inaction. Mike Pence’s eagerness to step in to facilitate Trump’s propaganda-laced sabotage of government action is unforgivable. It is unforgivable that Senate Republicans nullified criminal acts by Trump with the explicit intent of allowing him to get away with the same, or worse, a bargain that within months brought on both a pandemic and an economic depression when Trump took them up on their invitation, treating an emerging global crisis as, once again, fodder for self-promotion, falsehoods, and patronage.

It is absolutely clear that Trump, Mike Pence, and the rest of the White House knew in January that a deadly pandemic was coming, and that the Trump administration united to allow Trump to sabotage federal response efforts. It is absolutely unforgivable.

Professional Democrats have a lot of work to do when they return April 20.

This entry was posted in COVID-19, Democrats, Resistance Rebellion And Death. Bookmark the permalink.
%d bloggers like this: