Posted on January 2, 2020 by mikethemadbiologist

A while ago, the Washington Post wrote about this Gallup healthcare-related polling result: 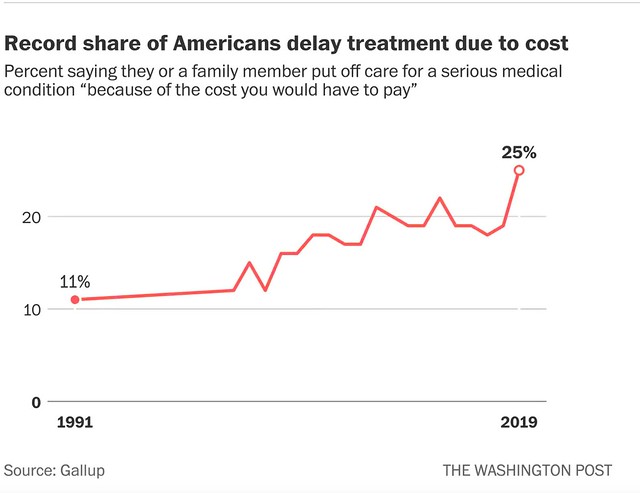 While they chalked it up in part to partisanship, as Democrats reported they were more likely to report they couldn’t afford to pay for healthcare, the Washington Post article inexplicably ignored this result from the same poll:

Add to that the finding that non-white respondents were fifty percent more likely to put off serious healthcare treatment than white respondents (pdf), and it seems this probably isn’t due to partisanship.

In fact, this was not only predictable, but predicted: in 2009 in Massachusetts, under Romneycare, one out of six households with healthcare insurance avoided medical treatment–and MA was (and is) one of the wealthiest states. As I noted in 2008, many people simply couldn’t afford to pay premiums, followed by co-payments and deductibles. They simply didn’t have the money, even if they weren’t poor:

“For someone my age who is making $40,000 a year you are required to lay out $5,000 for an insurance premium for coverage that covers nothing until you have spent $2,000 out of pocket,” Himmelstein said. “You are $7,000 out of pocket before you have any coverage at all. For most people that means you are already bankrupt before you have insurance. If anything, that has made them worse off. Instead of having that $5,000 to cover some of their medical expenses they have laid it out in premiums.”

We told you, despite centrist bleatings about how healthcare was expensive due to ‘Cadillac plans’*, this would happen. It was not only predictable, it was predicted. And it was predicted because it was observed. We also told you it would be a political landmine, if not a catastrophe–again, people who had jobs were going to be (and currently are) hammered by this.

I’m not ideologically wedded to Medicare for All, but, right now, that’s the only plan (especially Jayapal’s) that deals with this fundamental problem.

*I’m sure the image of welfare queens driving Cadillacs didn’t enter into choosing to use this term at all.

This entry was posted in Healthcare. Bookmark the permalink.