Democratic Voters Are Better Than, but Many Are Still Bad

Posted on May 24, 2019 by mikethemadbiologist

And we need to recognize that. Last week, this poll came across the transom:

As you might imagine, it was correctly viewed as bigotry. Then the polling outfit broke this down by party affiliation: 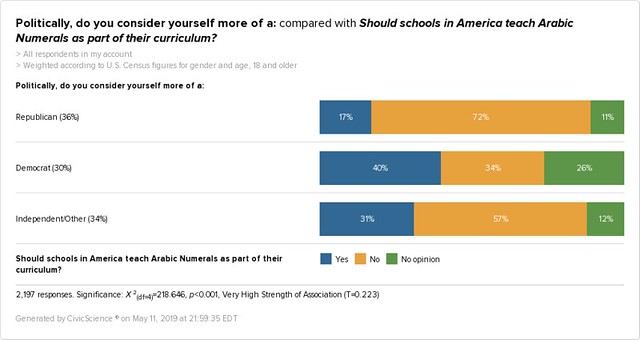 Democrats dwelled on the most obvious–and politically convenient–part–which indicates that Trump supporters are a lot more racist than anyone else. But this figure also contains an inconvenient truth (to use a phrase)… I don’t think it’s unreasonable to assume that one in four Democrats is racist–which admittedly is better than Republicans, especially once the Trumpists are factored in. We, too, have our deplorables.

Making better people is really hard, but convincing somewhat, erm, deplorable people to enter into a coalition with you, not so much. Something to keep in mind over the next eighteen months.

This entry was posted in Conservatives, Democrats, Racism. Bookmark the permalink.

3 Responses to Democratic Voters Are Better Than, but Many Are Still Bad