To Understand The NY Times, Watch What They Do

Posted on January 22, 2018 by mikethemadbiologist

And by “do”, I mean from whom they take advertising money. A key reason why the NY Times seems so confounding to liberal-ish (and farther to the left as well) observers is that they really have two different target audiences, but only one of them pays most of the bills. One might think that the target audience of the NY Times is upper-middle and gentry class readers who are urban/suburban and left-leaning. While this might not make the NY Times inclined to be a champion of the middle and working class (in New York City, that niche kind of belongs to the Daily News), this demographic really doesn’t like Trump at all. So why is the Times also running Heartland Whisper pieces, going out of its way to create false equivalencies, and offering fawning interviews with far-right radicals?

To understand this, you have to recognize the Times’ other constituency, best epitomized by this ad: 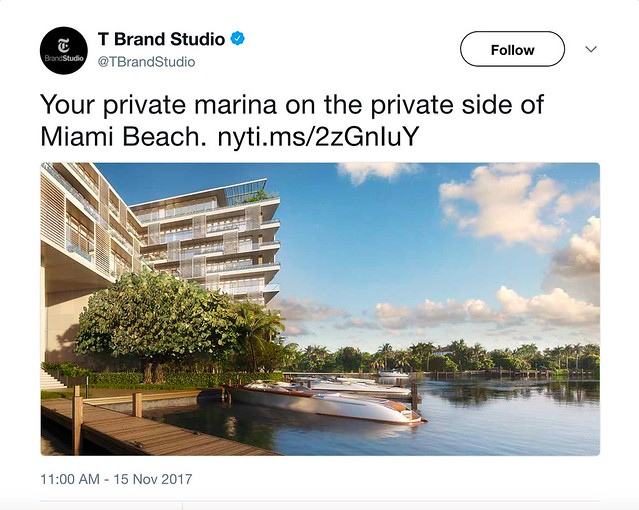 That’s an ad for a Florida complex where the penthouses go for $40 million. More importantly, if you look at the paper version, the low end ads are for Macy’s and Lord and Taylor’s, with the mid-level ads for Coach. The high-end stuff is nosebleed territory. This is where the NY Times makes its money (yes, the online site makes money, but not like the paper version). It needs these readers.

There are plenty of wealthy and rich people who vote Democratic; some are even rather far left. But many of them, even if they don’t like Trump himself, like his tax cuts. And some of them do like his presidency overall (how many left-leaning Democrats do you think are hanging out at Mar-A-Lago?).

Now, it’s not like the editors are running pieces by a committee of FIRE sector assholes. But they do know who part of their demographic is, just like every news organization does:

The NYT is the paper for Republicans that appreciate the arts, don’t reflexively hate women and gays, and aren’t openly racist.

That’s one important reason why the Times is running some of the crap it does. Just follow the money.

This entry was posted in News Media, Resistance Rebellion And Death. Bookmark the permalink.

1 Response to To Understand The NY Times, Watch What They Do