Posted on March 30, 2017 by mikethemadbiologist

There has been a lot of chatter about a recent Case and Deaton paper and follow-on media interviews which ascribe the increase in white working class mortality to ‘diseases of despair.’ Interesting how, when the white working class gets hammered, diseases are cited, but when, in the late 1970s and 1980s, the black working class experiences similar forces, the explanation is intrinsic to a dysfunctional ‘urban’ culture. The former are failed victims, the latter are morally-failing perpetrators. Just want to lay down that marker for future reference.

Anyway, what this post is about is this very interesting–in a horrifying way–CDC figure* showing the increase in drug-overdose deaths from 1999 to 2015 (pdf): 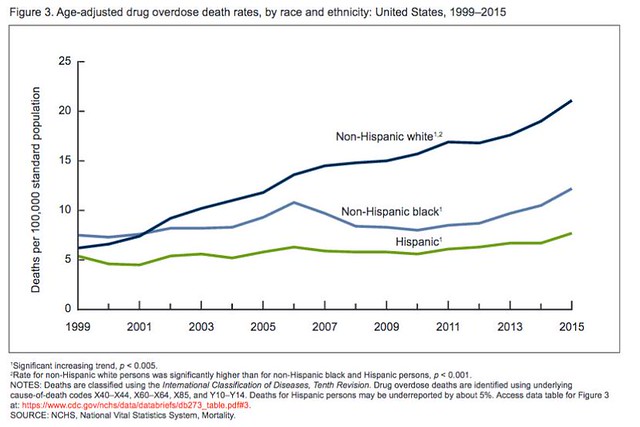 What’s remarkable is how constant this is. Media reports to the contrary, there really isn’t a spike (a simple linear regression yields an R-squared of 0.98, with about 1,800 additional deaths per year). The slight spike at the end is probably due to the shift to new drugs–and drug sources (there is always an ‘adjustment period’ as users learn–and don’t learn–which stuff can kill you).

My point is not to downplay the severity of the problem, but this isn’t a crisis in that it suddenly arose. The increase in white drug-overdoses has been fairly steady for at least seventeen years.

It was only a ‘crisis’ in that it was ignored for so long.

Related: To the extent this relates to the whole argument about Case and Deaton, working-class whites, etc., I think this is correct:

There are many winners and losers over the last decade within white middle-aged Americans, or among any other particular group. There are also many relevant ways to slice up these trends, and it’s not clear to us that it’s appropriate to framing these trends as a crisis among middle-aged whites

*The CDC publishes very interesting data, much of which is politically inconvenient (and not well-hyped to boot). Oddly, it is often ignored.

This entry was posted in Drugs. Bookmark the permalink.