The Failure Of Governance Of D.C.’s Metro Rolls On

Posted on September 13, 2016 by mikethemadbiologist

Once again, D.C. Metro is facing a failure of governance–and it’s not just Metro’s management, but the unwillingness of regional politicians to spend the needed money on the system. As a consequence, Metro, rather than transforming itself into a mass transit system, will increasingly become a commuter rail, as it intends to slash late night service to provide the needed time to perform routine maintenance (boldface mine):

Now, Metro is presenting a couple other options — but they all involve painful cuts to nighttime service and, in one case, Sunday morning service.

In documents released this week in advance of Thursday’s meeting of the Metro board, agency staff posed three different scenarios for cutting service on the rail system….

“The scenarios were developed to provide an additional 8 hours of track access each week to conduct safety-critical work,” Metro staff wrote in the proposal, “while also looking to minimize the number of riders impacted and the overall reduction in annual ridership.”

Here’s what Metro is proposing: 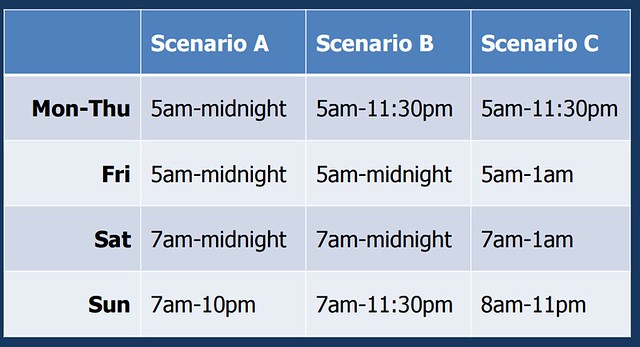 Metro is asking for far more time for routine repairs than other mass transit systems require (boldface mine):

First, and most obviously, the cuts Metro is proposing would give it more limited operating hours than any large US rail transit system.

Second, even before these cuts, many other systems were running for much longer hours while performing inspections and routine maintenance.

And finally, before and after the cuts, Metro would run trains in the early evening at lower frequency than many major systems. In addition to limited hours, limited frequencies make Metro a less dependable option for travel outside of peak hours.

Metro should learn from how these other systems perform inspections and routine maintenance without shutting down the entire system. Clearly, other systems have figured this out, but WMATA has not. Additionally, when major work is needed, Metro should adopt the approach of other major systems by shutting down lines for extended periods of time, as Chicago, New York City, and PATH have all done. These shutdowns are painful, but as we have seen with Safetrack, temporary reductions in service are much easier for riders to plan around than long-term low-quality service.

Area stakeholders need to decide if Metro should be one of the better rail transit operators in the country, or if it is acceptable as one of the worst. The proposed cuts in hours, along with already low frequencies in the early evening hours, would unquestionably resign Metro to being one of the worst systems for riders outside of peak hours.

Even before these cuts, other US systems have managed significantly longer service hours and much better off-peak frequency. Why can’t WMATA adopt the strategies these systems have used to get maintenance work done?

Given how laughable many of Metro’s operating procedures are, one must believe Metro could maintain the system more efficiently.

But there are two larger issues of governance. First, this plan reflects a political inability to plan for the future. According to a Metro board member, the system was moving away from being a commuter rail/rush hour system, so obviously it makes sense to weaken non-rush hour service. Or something.

The other issue is that if Metro had more funding for maintenance, it could hire more workers and keep the system open longer. Yet local and state politicians steadfastly refuse to put more money into the system.

Given Republican Gov. Hogan in Maryland, and that the Republicans controlling Virginia believe God sheds a tear every time a tax dollar is raised and spent, I don’t see how this gets better.

This entry was posted in DC, I For One Welcome Our Austerity Overlords, Transportation, We're Really Fucked. Bookmark the permalink.
%d bloggers like this: