The Radical Ammosexualists Of The Oregon Cowliphate Are Also Vandals

Posted on January 17, 2016 by mikethemadbiologist

I realize no one wants another Waco at the the Malheur Bird Sanctuary, which has been taken over by armed radical rightwing militants. But there needs to be a stronger federal response. They shouldn’t be receiving mail–or visitors. They shouldn’t be getting supplies to do construction. They shouldn’t be able to vandalize other people’s private property. Anyone and everyone who leaves, especially if they’ve stolen a government vehicle, should be stopped immediately.

They sure as hell shouldn’t be able to do this: 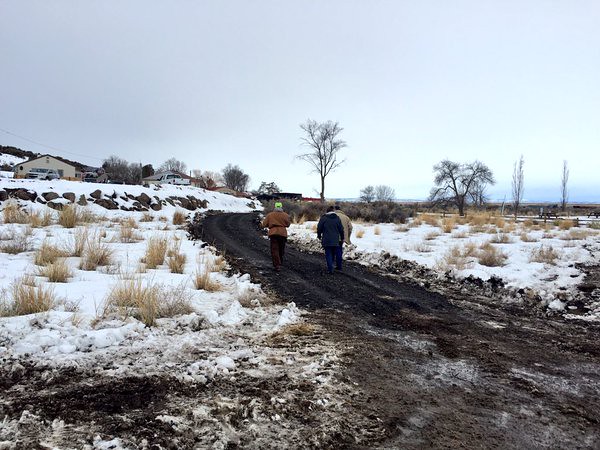 Do they have their own battalion of Seabees? That’s ridiculous, not to mention incredibly destructive for a very long time–asphalt is not good for the soil microbiota.

There is an appropriate response somewhere between “Bashir Al-Assad” and doing nothing.

Remember, these are not protesters who want the system to treat everyone fairly and equally. Their ideology is extreme–and built on falsehoods and delusions:

It is every bit as noxious and as predicated on lies and phantasms as the Nazi concept of herrenvolk or the belief in the need for an Islamic caliphate are. Worse, because it is superficially draped in time-honored traditional complaints about government, it bamboozles some well-meaning people into thinking these radicals are just angry about legitimate causes.

One of their two main demands is that the federal government turn over our lands to private individuals. Not only is that not going to happen, the majority of Westerners, never mind the country as a whole, don’t support that.

We will, as we have done before, refer to Comrade Thers:

Anyway, what we have here is a situation where a relatively small minority of Americans are claiming the right, ultimately backed up by their possession of weapons, to define the True Nature of American Freedom.

Which is fine, I guess, at least according to CNN…

How this differs in any important philosophical regard from the position, of, say, the Provisional Irish Republican Army, I cannot say.

How it differs in any practical sense, well (McVeigh cough) who knows.

The government could at least set up a perimeter and keep people from coming in, or leaving–unless those who leave are willing to surrender to the authorities.

And it’s better for the country if this stand-off is resolved sooner, rather than later–that is, once the political silly season really kicks into high gear.

This entry was posted in Ammosexuals, Authoritarianism, Conservatives. Bookmark the permalink.