Compulsive Centrist Disorder at Its Worst: The Ron Fournier Edition

Posted on November 14, 2014 by mikethemadbiologist

So Politico editor and Douchebag of Centrism Ron Fournier put this on the Twittarz: 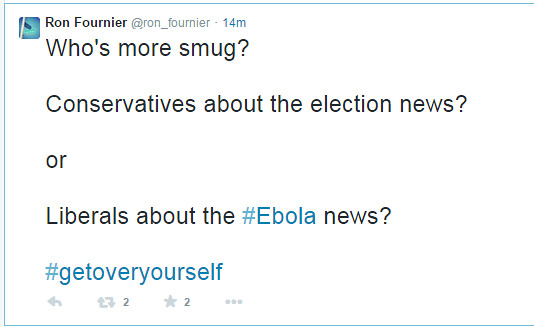 Needless to say, this is very stupid. First, conservatives should be happy they won the election; that’s a reasonable reaction–if you think elections matter, a desired outcome should make you happy. But what I focus on is the Ebola quip, since it demonstrates the intellectual and moral degeneracy of the Washington political press corps.

First, people, regardless of political persuasion, should be happy that we have successfully contained and prevented our Ebola cases. Despite an initial rocky start (to be polite about it) and the fear mongering, this is a public health system success: we stopped a dreadful disease in its tracks. But the “smug” remark tells you what a seriously fucked up individual Fournier is. Unlike many political issues, where determining who ‘got it right’ is difficult, if not impossible, there were specific outcomes that the fear mongers–who were primarily, but not exclusively on the right–and that the Coalition of the Sane predicted. Fox News and the Mighty Conservative Wurlitzer got it wrong.

There’s no way to spin this, no green room, no talking points, no focus-group tested ad strategy. They were just wrong. The point isn’t to claim a ‘win’, but an accounting: the next time these bozos try to inflict health policy on us (such as a Well Regulated Vagina), we need to remember they were very wrong on this issue.

This is where Fournier’s view of politics as a game, and not as something that affects people’s lives really hurts the rest of us. Like it or not, Villagers like Fournier influence our politics–and they just don’t live in the same moral and ethical universe the rest of us do.

And the congregation responds: This is yet another reason why we can’t have nice things.

This entry was posted in Compulsive Centrist Disorder. Bookmark the permalink.

4 Responses to Compulsive Centrist Disorder at Its Worst: The Ron Fournier Edition